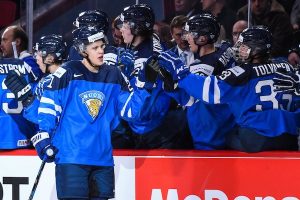 The Winnipeg Jets signed forward Joona Luoto on Saturday to a three-year, two-way contract worth an annual average of $758,300.

Luoto and Patrik Laine were teammates for several Tappara teams growing up, including their U18 and U20 teams. Internationally, Luoto represented Finland at the 2017 World Junior Championship where he was teammates with Kristian Vesalainen.

— With files from the Winnipeg Jets