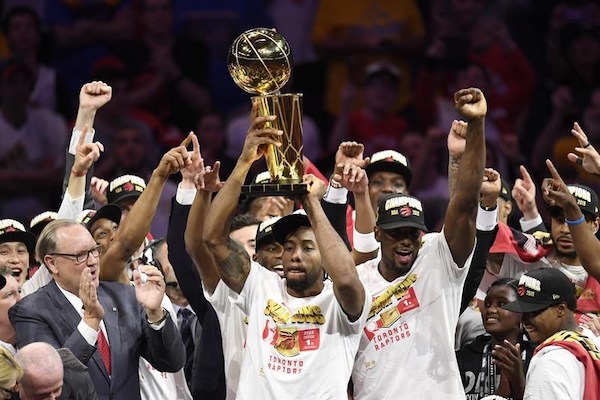 TORONTO — Some Raptors players returned to Toronto on Saturday night for the first time since their electrifying NBA championship win south of the border.

Maple Leaf Sports & Entertainment, which owns the franchise, initially said the whole team would arrive at Toronto’s Pearson International Airport around 9 p.m. eastern time, but on Saturday afternoon said most of the players would extend their trip.

Coach Nick Nurse was among the high-profile figures greeted by dozens of fans at Pearson.

Flanked by Peel Regional Police, Nurse fist-pumped and waved to the small crowd.

Some team members — such as Fred VanVleet and Jeremy Lin — have also returned home.

The Raptors became the first franchise outside the U.S. to win the NBA title by beating the Golden State Warriors in Oakland, Calif., on Thursday.

They were expected to spend Friday night partying in Las Vegas before flying home Saturday.

A spokesperson for the Raptors said the team is expected to return for a victory parade and rally in Toronto on Monday. The players are expected to travel the parade route in open-air, double-decker buses with the Larry O’Brien Championship Trophy beside them.

The parade will start at Exhibition Place and travel east on Lakeshore Avenue before heading north on York Street and then University Avenue. The procession will then briefly travel east on Queen Street and end at Nathan Phillips Square outside Toronto’s city hall.

Much of Canada was swept up in the team’s exhilarating playoff run, with fans celebrating long into the night after the big win, which also marked the first time a Canadian team has secured one of the big four professional sports championships since the Toronto Blue Jays won the 1993 World Series.

—with files from The Associated Press