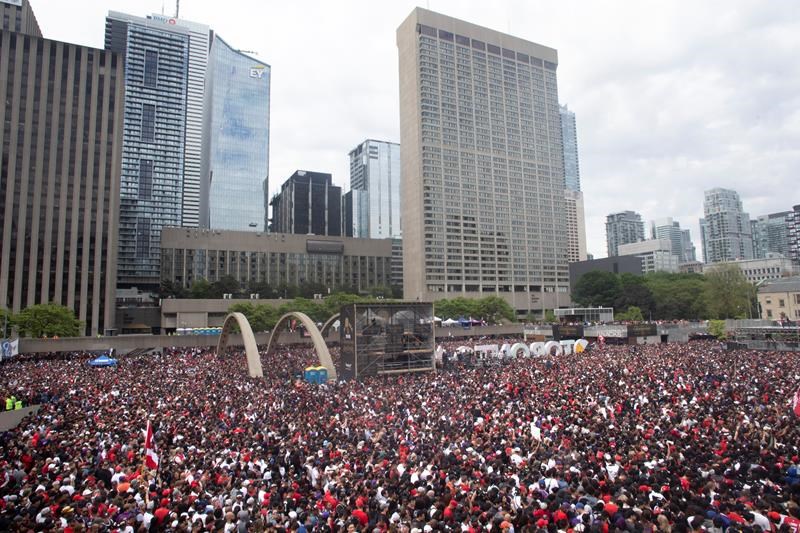 Crowds gather in Nathan Phillips Square as they prepare to celebrate the Toronto Raptors winning the NBA Championship in Toronto on Monday, June 17, 2019. (THE CANADIAN PRESS/Chris Young)

TORONTO — Frantic Raptors fans bolted from a square in downtown Toronto on Monday after police said they were investigating shots fired at a massive rally celebrating the team’s historic NBA championship win.

The festivities were briefly suspended as one of the hosts alerted the crowd that there was an emergency and urged the public to stay calm. But the events quickly resumed even as dozens of fans ran in several directions at one end of the square.

Police said shortly afterwards that two people had been shot and suffered serious but not life-threatening injuries. Two suspects were arrested and firearms recovered, police said.

Some in the crowd said they had not heard any shots but rushed from the area as others panicked.

One 25-year-old woman said she had been watching the speeches at the rally when friends pushed her to the side. “We started ducking,” she said. “We got stampeded.”

Mike Mudidi said he was enjoying the celebrations when he heard screams behind him that someone had pulled out a gun. He said he froze as people started running in all directions.

“I just grabbed my buddies’ hands and ran,” he said, noting he was in shock but otherwise OK.

Some who stayed behind huddled near pillars in Nathan Phillips Square even as the team and several dignitaries — including Prime Minister Justin Trudeau — remained on stage. The ceremony wrapped up a short time later.

Supporters had spent several hours at the square waiting for the team to arrive in a victory parade that began this morning. The site was quickly overflowing with fans of all ages and police worked to stop more people from entering the area, which the city said was at capacity.

The parade, which included five open-air double-decker buses carrying the players, slowed to a crawl and at times halted completely due to the crush of people along the route.

Construction workers watched the festivities from scaffolding along the route, and as traffic ground to a standstill on a nearby thoroughfare, some motorists left their vehicles to peer at the activity.

Many fans said they decided not to go to school or work so they could attend the massive celebration.

The Raptors’ championship win last week came in Game 6 of a rollercoaster series that captured national attention. On Monday, the Golden State Warriors took out a full-page advertisement in the Toronto Star newspaper, congratulating their rivals for taking the title.

The last time the city held a sports celebration of this magnitude was after the Toronto Blue Jays won the World Series in 1993. That parade saw fans climbing trees and statues on city streets to catch a glimpse of a team that included Joe Carter and Roberto Alomar.