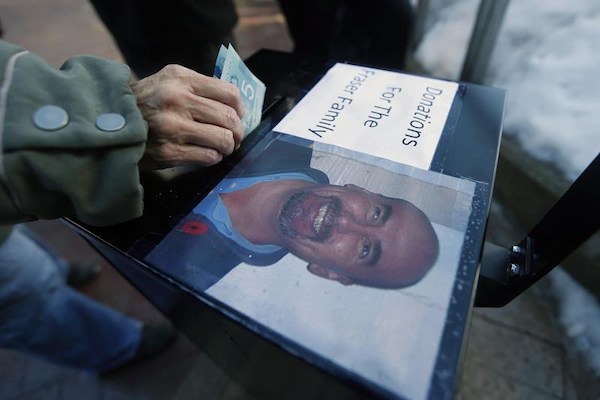 A woman places some money in a donation box as Winnipeg bus drivers gathered to support each other at a rally for Irvine Fraser, who was killed by a passenger, and to demand safety improvements on buses outside city hall in Winnipeg, Friday, February 17, 2017. (THE CANADIAN PRESS/John Woods)

WINNIPEG — The brothers of a Winnipeg bus driver who was fatally stabbed on the job broke down in tears at a sentencing hearing today for the man who killed him.

They said Irvine Jubal Fraser’s death was senseless and has left them angry and devastated.

Fraser, who was 58, was stabbed multiple times during a fight with Brian Kyle Thomas in February 2017.

There was a confrontation between the two as Fraser tried to get Thomas off the bus late at night and at the end of the route.

Dean Byard told court Fraser was the oldest of four brothers in a close-knit family, and was a loving father and husband.

“It’s been 2 1/2 years and it still feels like it happened this morning,” Byard said Monday in his victim impact statement.

“I just want Jubal back.”

Part of what happened was captured on security cameras that show Thomas asking the driver where he was and if he could use a phone.

Fraser told Thomas to leave the bus several times before the driver grabbed the man by the neck of his sweater and bent him over backwards. The driver then shoved Thomas off the bus.

The defence did not present evidence during the trial but argued the bus driver provoked the attack.

“My brother Jubal was a good man and deserved to go home to his family.”

Second-degree murder carries an automatic sentence of life in prison. Both the Crown and defence are asking there be no chance at parole for 12 years.

Crown prosecutor Paul Girdlestone said the killing has left other drivers and their families terrified.

“The transit community is understandably outraged,” he said.

“They (drivers) wear uniforms. They are often the front line of the public’s anger against authority.”