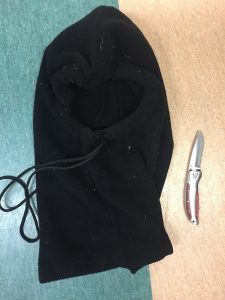 The hood and knife allegedly used by a 17-year-old boy in a robbery in the RM of St. Andrews on Tuesday. (RCMP HANDOUT)

Charges are pending against a 17-year-old Winnipeg boy after an armed robbery at a home in the RM of St. Andrews.

RCMP responded to the home on Norwood Road at around 3:10 a.m. Tuesday, where a suspect broke in with a knife.

Police found the suspect leaving the home wearing a hood tightly tied around his face. He took off running but was arrested a short distance away.

Police say the suspect stole a vehicle in Winnipeg and drove it to the location on Norwood Road, which was recovered by officers, along with stolen property.

A 78-year-old man and 77-year-old woman were treated and released by paramedics.

The teen is facing charges of robbery with a weapon, breaking and entering with intent, disguised with intent to commit an offence, forcible confinement, possession of a weapon for a dangerous purpose, uttering threats and theft.