Home » The Canadian Press » ‘This is Our Story:’ Winnipeg General Strike Commemorated on Screen, Stage

‘This is Our Story:’ Winnipeg General Strike Commemorated on Screen, Stage 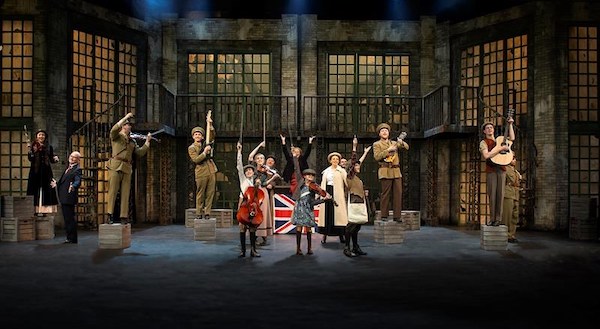 The Rainbow Stage production of “Strike!” in Winnipeg is shown in this undated handout photo. (THE CANADIAN PRESS/HO – Robert Tinker)

WINNIPEG — A moment in history that changed Canada forever is headed to the screen and stage showing the lasting impact of the lessons learned during the Winnipeg General Strike.

The movie musical “Stand” follows a young Ukrainian immigrant who falls in love with a Jewish suffragette on the streets of Winnipeg during a time of social upheaval 100 years ago.

“This was us. This is our story, it has something to say to the world,” said co-writer and composer Danny Schur. “It makes me proud to be a Winnipegger.”

The movie is based on Schur’s original musical “Strike.” He wrote and composed the piece in 2003 after learning about the Ukrainian immigrants involved in the labour protest. He researched their stories, went to their graves and a fictional “Romeo and Juliet” love story set against the backdrop of the strike just flowed out of him, he said.

Winnipeg was Canada’s third-largest city in 1919 and had a population of around 180,000. People called it the Chicago of the north, but prosperity and good fortune wasn’t flowing equally.

When veterans returned from the First World War there were very few jobs. Those who already had jobs were paid very little to do difficult and oftentimes dangerous work.

In the days and weeks that followed, racial and anti-immigrant tensions swirled around the strike with politicians and the business community calling it a Bolshevik conspiracy. The federal government ordered the arrest of eight leaders.

Near the end of the six-week strike police armed with guns and clubs charged through a crowd of strikers on a day that became known as Bloody Saturday. It resulted in two deaths and thirty workers wounded.

In the wake of the massive movement, strike leaders ended up on trial, but there was also a renewed unity in the labour movement across the country.

Director Robert Adetuyi said when he read the story, he connected to it as a Canadian and as an immigrant.

Adetuyi, whose previous work includes “Stomp the Yard” and “Bring It On: Worldwide #Cheersmack,” made some changes to the original script with Schur to include more updated music and add diversity to the cast. Based on historical records the two men found, a Metis veteran and an African American who was a refugee of racial tensions south of the border were added to the script.

Adetuyi said he knew the lessons from the general strike would really resonate with young people today.

“They are going to actually understand a little bit more of what it means to be an immigrant today and why we care about immigration,” he said.

“I think it’s really interesting when art can move into the arena where it has something really significant to say.”

The movie, which was shot in the city in 2018, will have its premier in Winnipeg in September. Around 500,000 copies will later be distributed by the Canadian Museum for Human Rights and labour organizations to Grade 11 students across the country.

An updated version of the original play will also perform for the 100th anniversary of the strike’s conclusion on June 21 at Winnipeg’s Rainbow Stage. Play director Sharon Bajer said it’s important to keep telling stories of the sacrifices made for better working conditions by those before us.

“We take a lot of things for granted that people had to fight and die for back then,” she said.

“Can you imagine trying to organize 30,000 people to walk off the job with no internet?”