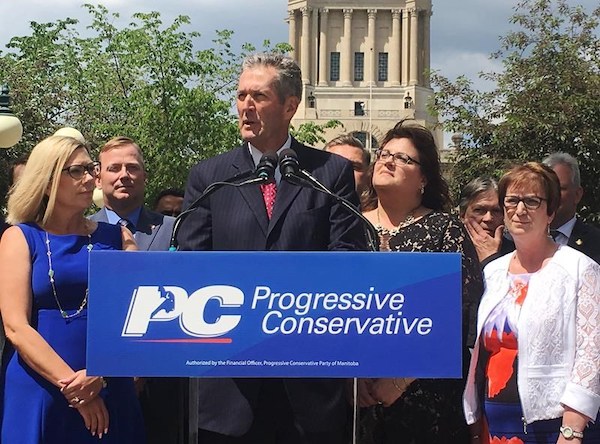 WINNIPEG — Premier Brian Pallister, saying he needs a new mandate from voters after fulfilling key promises from his last campaign, has moved up the provincial election by more than a year.

The next vote was scheduled for October 2020, but Pallister announced Wednesday it will be held Sept. 10.

“We’ve got over 90 per cent of the things we ran on done or in major progress right now,” he said outside the legislature where he was surrounded by his Progressive Conservative caucus.

“For the things that we’re going to be presenting to you, which I won’t give you today … we haven’t asked Manitobans for permission. And we need to.”

Pallister’s biggest promise from the last election — a cut to the provincial sales tax to seven per cent from eight — was approved by the legislature earlier this month and is to take effect July 1. It will be six years to the day since the former NDP government raised the tax.

Pallister did not say when the election campaign will officially begin. Under provincial law, campaigns must be between four and five weeks, which points to a start time in the first half of August.

Pallister’s Progressive Conservatives were elected in 2016 with 40 of the legislature’s 57 seats — the largest majority government in Manitoba in a century. They have been raising exponentially more money than the NDP and the Liberals, and have nominated more candidates.

NDP Opposition Leader Wab Kinew said his party is ready to campaign and will focus on health care as its No. 1 issue. The Tory government is converting some emergency rooms in Winnipeg to urgent-care centres, which do not handle life-threatening cases such as heart attacks.

Last week, one of the remaining emergency rooms had to temporarily redirect some patients to other hospitals because of a heavy patient load.

“When you have two emergency room closures that are causing chaos in the health-care system, it’s very clear to me what this election is about,” Kinew said.

It will be the NDP’s first campaign with Kinew as leader. He took over in 2017 after former premier Greg Selinger resigned.

Kinew has been the target of Tory attacks ads over past criminal convictions for assaulting a taxi driver and impaired driving. He recently received a record suspension that removes them from the Canadian Police Information Centre database.

Kinew was also accused of assaulting his former common-law partner in 2003, but those charges were stayed by the Crown a year later.

The Tories had a website up on Wednesday highlighting the assault on the cabbie.

Liberal Dougald Lamont, who was also elected in 2017 as his party’s leader, said he plans to have candidates in all 57 constituencies. In the last election, a handful of Liberal candidates had to drop out, including some who had not filed their paperwork correctly with Elections Manitoba.