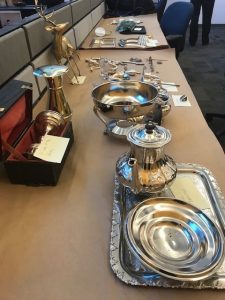 Sterling silver items recovered from a break-in at a business in the 700 block of Wall Street on June 10. (WPS / HANDOUT)

Winnipeg police have arrested a 29-year-old man in connection to several break-ins and robberies this month.

Officers came across the suspect on June 12 in a stolen truck parked in the 800 block of Lansdowne Avenue.

Police linked the suspect to two vehicles that were broken into on June 9 in the 800 block of St. James, Street.

On June 10, the same suspect allegedly stole $4,400 in various sterling silver items from a business in the 700 block of Wall Street, and allegedly broke into a home in the 400 block of Craig Street.

A home in the 2000 block of Wellington Crescent was broken into on June 11.

The suspect faces 14 charges of break and enter to commit theft and three charges of theft under $5,000. He remains in custody.