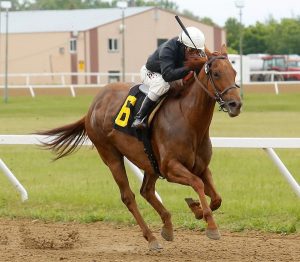 It would certainly appear as if Richard Mairs and Tom Gardipy Jr. have something going on this season.

Last weekend, Gardipy Jr., a five-time champion trainer at Assiniboia Downs, saddled five winners, four on Sunday, and took over the lead among trainers at the Downs with 19 wins this season.

Mairs, the champion jockey from Caymanas Park in Jamaica won six races on the weekend including Races 1, 2, 4 and 5 on Father’s Day — all on Gardipy Jr.-trained horses, to jump into a tie with Alex Cruz atop the jockey standings. He’s also money. Mairs has finished in the money in 41 of his 70 races this spring.

And it will only get hotter this weekend with two stakes races. On Friday night, there is the $30,000 Chantilly Stakes, a three-year-old filly prep for the Manitoba Oaks and on Saturday, it’s the $30,000 Golden Boy Stakes, a prep for the Manitoba Derby. Both are sprints, six furlongs each, and both will bring together the best three-year-olds on the grounds.

The morning line favourite in the Chantilly is Hidden Grace at 2-1. Hidden Grace, another Going Commando (Escape Clause) filly bred by Cam Ziprick and Arnason Farms, has won her only start this year and has won all three starts in her career. Renaldo Cumberbatch will ride for trainer Michael Nault.

On Saturday, the invader, Florida-bred Oil Money, is the pre-race favourite at 1-1 in the Golden Boy. Ridden by Prayven Badrie and trained by the great Robertino Diodoro, Oil Money should get a challenge from 2-1 second-favourite Lifesbeengoodsofar trained by Murray Duncan and ridden by Tyrone Nelson. Surprise allowance winner Delvecchio, (5-1) who raced a week ago, should also be in the mix for Mairs and Gardipy Jr., and trainer Shelly Brown’s Mr. Dazzle (6-1), ridden by Antonio Whitehall, will garner some support.

Don’t forget this weekend at the Downs, there are plenty of chances to win more than just a few thoroughbred races. The Downs has free VLT tournaments. You just have to enter in the Club West Gaming lounge after live racing ends. Get into the draw for 10 chances to win $20 in free VLT spins. The top winner from each night participates in a month-end finale for more spins and $250 in prize money.

And don’t forget Chase the Ace. Your odds to win have improved dramatically. There are now only 39 playing cards remaining in Winnipeg’s ultimate Chase the Ace game at the Downs, with a $500 joker, three $250 aces and, of course, the jackpot ace of diamonds still available to be drawn. Buy your $5 ticket(s) by 9 p.m. You’re helping support Final Furlong in its quest to bring together retired race horses and good owners.

Racing begins on both Friday and Saturday night at 7:30 p.m.