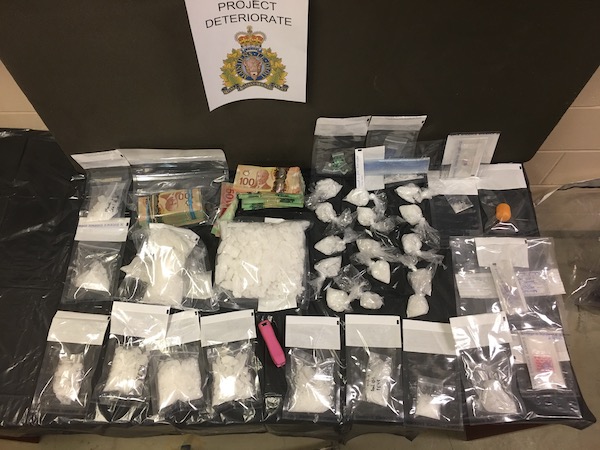 Drugs and other items seized by police during a raid of a Winnipeg home on June 19, 2019. (RCMP HANDOUT)

Manitoba RCMP have dismantled a drug trafficking network operated from within Selkirk and Winnipeg, which authorities believe was supplying drugs to communities in the Interlake region.

Project Deteriorate began in November 2018 and resulted in a search warrant being executed at a Winnipeg home on Wednesday.

Officers seized more than two kilograms of methamphetamine, a quarter of an ounce of fentanyl/heroin, $25,000 in cash, a Chevrolet Trax and a Taser.

“The impact of this investigation is far-reaching and has affected the drug supply chain to various Interlake communities,” said Inspector Allan Hofland with Selkirk RCMP. “Our communities are seeing the negative impacts that stem from the drug trade such as property crime, assaults, robberies, and home invasions.”

RCMP say they anticipate to make additional arrests as a result of the investigation.