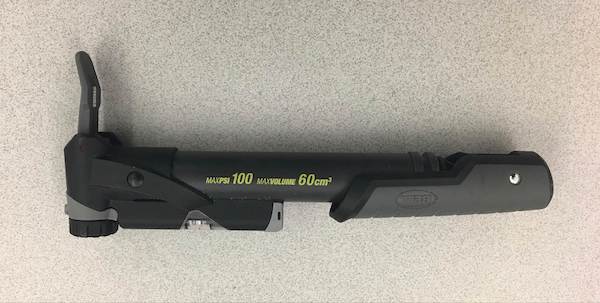 The bicycle pump Winnipeg police seized from a man who allegedly used it in an armed robbery of a Liquor Mart on Wednesday. (WPS / HANDOUT)

WINNIPEG — A man made off with a bottle of liquor after allegedly robbing a Liquor Mart while holding a bicycle pump disguised as a gun.

Winnipeg police were called to the 300 block of Ellice Avenue on Wednesday night after an employee and customers described the weapon as a gun.

Police found the suspect shortly after in the same area, where he produced what was believed to be a gun from his waistband. The suspect stood in a shooting stance and pointed it at officers from approximately 75 feet away.

Police decided not to use lethal force out of the safety for people in the area.

The man was eventually taken into custody, where police seized a bicycle pump and a bottle of stolen liquor.

Police spokesperson Cst. Jay Murray says the charge of armed robbery using a firearm applies because it doesn’t always have to be a physical weapon.

“Especially if the individual uses it in a manner to make people think it was one — such as the case here,” Murray said.

← Previous: As Parliament Rises, Which Bills Made it Through — and Which Ones Didn't Next: RCMP Bust Interlake Drug Ring, Seize Meth, Heroin and Cash →
Tags: Crime | Liquor | Winnipeg Police