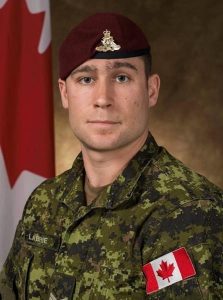 Bombardier Patrick Labrie, a member of the 2nd Regiment, Royal Canadian Horse Artillery, which is based in Petawawa, Ont., poses in this undated handout photo. (THE CANADIAN PRESS/HO – DND-MND Canada)

OTTAWA — The remains of the Canadian soldier killed in a parachute-training exercise in Bulgaria returned to Canada Saturday, where his grieving parents asked for a thorough investigation to prevent a similar tragedy in the future.

Bombardier Patrick Labrie, a six-year veteran of the Canadian Forces originally from Buckingham, Que., and most recently based out of CFB Petawawa, died from injuries sustained Monday night while parachuting near the Bulgarian village of Cheshnegirovo.

Military police are investigating the circumstances surrounding his death.

Members of Labrie’s family travelled to Bulgaria to escort his body back to Ottawa, where they were greeted by Defence Minister Harjit Sajjan, defence chief Gen. Jonathan Vance and members of Labrie’s unit, the 2nd Regiment of the Royal Canadian Horse Artillery.

Those on hand stood silently as Labrie’s flag-draped casket was slowly unloaded from the massive hold of a military plane, the setting sun casting the scene an orange hue, before a contingent of pallbearers carried his remains inside a hangar to the sad lament of a bagpiper.

Members of Labrie’s unit could be seen before the plane arrived consoling each other and wiping away tears as they waited for his remains to be unloaded before his parents spoke during a short, sombre ceremony about their son’s desire from an early age to join the military.

Yet father Jean Labrie and mother Julie Rivard, fighting back emotions, also spoke about the devastation of losing their son — and their fervent hope that a similar tragedy doesn’t befall anyone else.

“Our life has been torn apart. Patrick was a ray of sunshine in our life. He loved everyone and he was loved by everyone,” Rivard said, later adding: “We sincerely hope the investigation will be thorough in order to ensure this situation does not happen to another young soldier.”

Family members then placed flowers on Labrie’s casket before it was returned to the plane and flown to Toronto, where an autopsy will be conducted. Defence officials have not said when they expect the military-police investigation to be complete.

Labrie was one of about 100 Canadians participating in a U.S.-led training exercise in Bulgaria called Swift Response when he died. Officials have said he was conducting a low-level jump at night, and that he had jumped from a Canadian military plane and was using Canadian equipment.