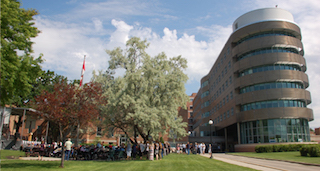 OTTAWA — The federal government is being asked to investigate an alleged decline in service at a hospital for veterans in Winnipeg.

The Union of Veterans Affairs Employees said it has received several complaints about the quality of care at Deer Lodge Centre in Winnipeg, which the union alleges is the result of cuts to funding and staff at the facility.

“We need to live up to the sacred obligations that we have to our veterans,” UVAE national president Virginia Vaillancourt told The Canadian Press.

Deer Lodge’s chief operating officer, Kevin Scott, said some “efficiencies” were implemented last fall to reflect the declining number of veterans in the hospital, which the federal government transferred to the province in 1983.

While the province provides Deer Lodge funding for all of 400-odd patients, the federal government gives the hospital additional funding on a per diem basis for additional services for each of the 60 Second World War and Korean War veterans at the centre.

However, the centre’s funding agreement with Veterans Affairs Canada was originally set up for 155 veterans, said Scott, “and so the funding was being adjusted accordingly to match the number of veterans in beds.”

“So each individual veteran, the funding is still the same. It’s the total number of veterans that we are adjusting the staffing to match that.”

While those adjustments resulted in an overall reduction in staff for recreational programs, food services and porters, Scott said individual veterans have not been directly impacted and have actually seen increased care.

Not so, said Vaillancourt, who met with Veterans Affairs Minister Lawrence MacAulay last week to voice her concerns about Deer Lodge and ask for an independent investigation into the centre.

“The investigation needs to deal with the level of care that is being provided to veterans,” she said, “because it’s not the quality of care that our veterans deserve and we as Canadians are obligated to ensure our veterans are taken care of properly.”

MacAulay’s spokesman Alex Wellstead said the government takes all concerns about veterans’ wellbeing seriously and is looking into the union’s complaint about Deer Lodge.

“We expect all provincial facilities to deliver support to veterans in line with the agreements the department has with those facilities,” Wellstead said in an email.

“If any veteran is not receiving the support they deserve, we will always look into the matter to ensure they do.”

Deer Lodge is the second former Veterans Affairs hospital to come under the microscope over allegations of declining care in recent months after a class-action lawsuit was launched against Ste. Anne’s Hospital in Quebec last year.

A Quebec Superior Court judge in February authorized the class-action claim, which alleges the level of care and services have dropped at the Sainte-Anne-de-Bellevue institution since it was transferred from federal to provincial control in April 2016.

The suit contends the handover saw staff levels cut by 40 per cent. The shortfall was made up by part-time employees which resulted in a constant lack of personnel, the suit says.

It also claims that doctors and specialists are less available than they were before the handover to Quebec. It cites the example of a urologist who made monthly visits to the hospital now being present just four times a year.

About 300 veterans are covered by the suit, which is seeking about $92 million in damages.

Ste. Anne’s Hospital was the last federally administered veterans hospital when was it handed over to the Quebec health care system in 2016.

Wellstead said a number of measures have been implemented to ensure veterans continue to receive quality care at Ste. Anne’s hospital, but would not comment on the lawsuit because it remains before the courts.