Couple Moving to Manitoba Loses Almost Everything in U-Haul Theft 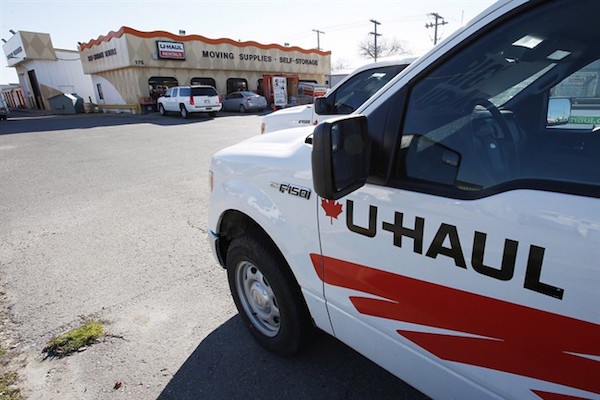 Vehicles are parked in front of a U-Haul store in Winnipeg, Tuesday, October 21, 2014. (THE CANADIAN PRESS/John Woods)

ABBOTSFORD, B.C. – A couple moving from Langley, B.C., to Manitoba didn’t even get out of the Lower Mainland before their plans went sideways, but Abbotsford police hope someone has information that can help the pair.

Sgt. Judy Bird says the U-Haul moving truck was packed with almost all the couple’s possessions when it was stolen from a hotel parking lot in Abbotsford sometime between last Friday night and Saturday.

The truck contained everything from furniture to books, photos and a red Taotao scooter but it was completely empty when it was found on Saturday, in the parking lot of a Surrey secondary school.

Police are appealing for information from anyone who may have seen the U-Haul or have dashcam video that could help them trace the thieves.

In a similar case, a U-Haul containing all the possessions of a newlywed couple moving to B.C. from New Brunswick was stolen from an Abbotsford parking lot in September 2017 and was found empty in Surrey.

In that case, investigators linked a suspect to a Surrey house believed to contain stolen goods and most of the couple’s property was returned in less than two weeks.