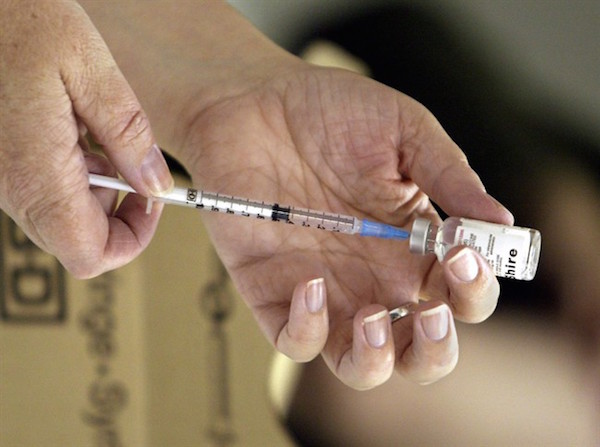 A nurse loads a syringe with flu vaccine for injection at the Victoria Clipper Terminal in Victoria Saturday, Oct. 23, 2004. (THE CANADIAN PRESS/Chuck Stoody)

A new report says the number of nurses employed in Manitoba is on the downslope, with 510 fewer nurses working in the province’s health-care system.

The report by the Canadian Institute of Health Information says the decline from 2017 to 2018 was 14,304 to 14,814, respectively, for those providing direct health-care.

The Manitoba Nurses Union slammed the Pallister government for contributing to the cuts through the government’s overhaul of the health-care system, including the recent closure of several hospital emergency rooms.

“It’s disturbing to see that there are fewer nurses employed in Manitoba. And most of that decrease appears to be from nurses providing direct care to patients,” said MNU president Darlene Jackson.

“Nurses just want to provide care for patients, but severe cuts and closures are chasing nurses out of the system by creating situations that are unsafe. The government needs to reverse course immediately, and develop a robust recruitment and retention strategy for nurses.”

In a statement, Opposition NDP leader Wab Kinew said, “We need more nurses, not less. Pallister’s cuts are taking us in the wrong direction and it’s hurting patients and their families.”

The report also noted the average age of a nurse in Manitoba is 45.4, the highest in Canada.