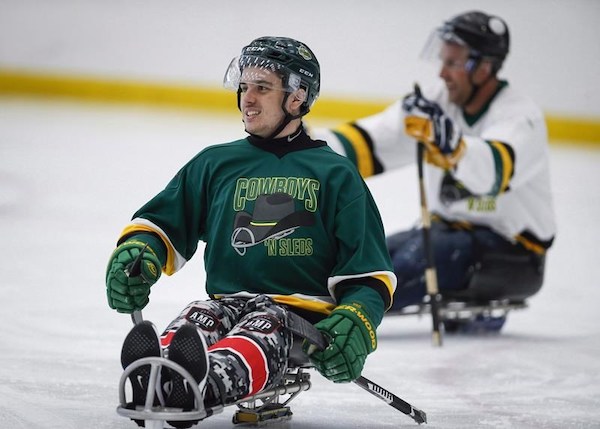 AIRDRIE, Alta. — A Humboldt Broncos hockey player who was paralyzed in a deadly bus crash last year has signed a multi-year contract with Adidas.

“I got some nice swag and gear.”

Straschnitzki was paralyzed from the chest down when the junior hockey team’s bus collided with a semi truck that blew through a stop sign in rural Saskatchewan on April 6, 2018. Sixteen people were killed and 13 were injured.

While still in the hospital, Straschnitzki talked about how he wanted to play on Canada’s national sledge hockey team.

Since then, Straschnitzki has been working on his physiotherapy and training.

He said a representative with Adidas Canada reached out to him over social media.

“It’s been a couple of months we’ve been in contact,” he said. “They sent over a contract. They set out the rules.”

The sportswear company said Thursday that the deal is a partnership aimed at helping Straschnitzki further his hockey career with the support of National Hockey League stars, including Connor McDavid, Tyler Seguin and Nazem Kadri.

Straschnitzki is to participate in Adidas Canada’s hockey and training campaigns and programs throughout the year.

He hasn’t been actively searching out deals, he said, but he’s excited his hard work has been paying off.

“I’m just trying to be a good person and spreading my message. And I think that continued hard work helps with these opportunities.”

His parents, Tom and Michelle Straschnitzki, are excited for him.

“He’s got more shoes than a shoe store now,” said his father.

Straschnitzki was also invited to be a part of the CBC television series “Heartland.”

“They were filming in Calgary so they asked me if I wanted to be an extra in the background for one of their scenes.”