Manitoba Public Health Officer Confirms Case of Measles, But Risk to Others Low 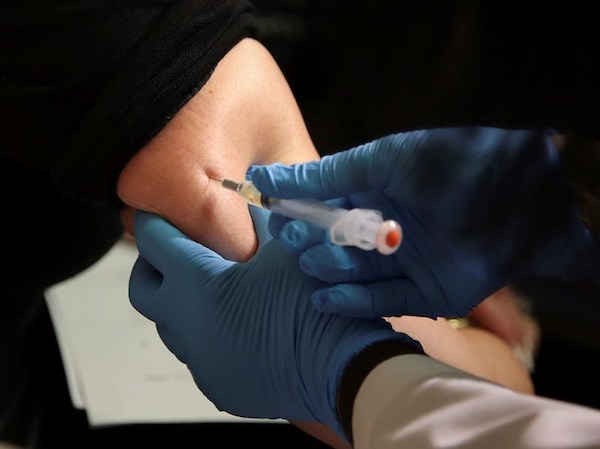 A woman receives a measles, mumps and rubella vaccine at the Rockland County Health Department in Pomona, N.Y., on June 5, 2019. The chief provincial public health officer confirmed today that a travel-related case of measles has been reported in Manitoba. (THE CANADIAN PRESS/AP, Seth Wenig)

WINNIPEG — Manitoba’s chief public health officer has confirmed a case of travel-related measles in the province.

A release says a man in his 30s is believed to have contracted the virus while travelling in the Philippines.

It says the man lives in the area of the Winnipeg Regional Health Authority and is recovering in hospital.

Health authorities say the risk of transmission is low, but people may have been exposed on Philippines Airlines Flight 116 from Manila to Vancouver or WestJet Flight 458 from Vancouver to Winnipeg — both on Monday.

Authorities also say people may have been exposed in the airports’ arrival areas or at the Winnipeg Assiniboine Clinic or the Health Sciences Centre on Tuesday.

Pregnant women, people with compromised immune systems and infants under 12 months of age are at higher risk of complications.

They are urged to contact health providers for potential treatment if they are worried that they may have been exposed.

Measles is a highly infectious, communicable disease that is spread through droplets in the air from coughing or sneezing. It can be life-threatening if left untreated.