Home » The Canadian Press » Canuck-Themed Restos Give the World a Taste of Canada, Make Expats Feel at Home

Canuck-Themed Restos Give the World a Taste of Canada, Make Expats Feel at Home 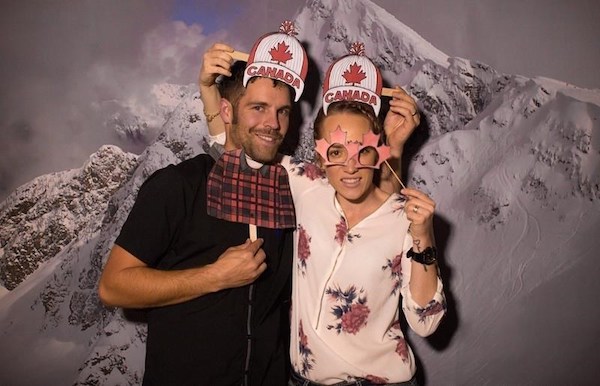 Growing up, Paryse Lambert spent summers with her mother’s family in Quebec indulging in French-Canadian staples including croque monsieur, steak hache, and of course, poutine.

After settling down in Jacksonville, Fla., the dual U.S.-Canadian citizen longed for that mouth-watering medley of crispy french fries and slinky cheese curds smothered in gravy. What she found were grotesque mutations of the dish with shredded mozzarella broiled over what seemed like a spud-based baked ziti.

These American abominations were nothing short of “shameful,” said Lambert. So, she decided to rectify this culinary crime by launching the Stuffed Beaver, one of many establishments around the world devoted to an unexpected theme: Canada.

From Japan to Brazil, Canuck-centric bars and restaurants are set to ring in Canada Day with festivities featuring Tragically Hip cover bands, maple-infused menus and a steady flow of caesars.

Bedecked in kitsch Canadiana ranging from local licence plates to sports jerseys, these red-and-white restos are exporting Canadian culture and cuisine to a global audience, while serving as a hub for expats to be reminded of the comforts of home, proprietors say.

“(Canadians) are growing like cockroaches here, even in northern Florida,” said Lambert. “We’re an underserved market.”

A stone’s throw away from the Interstate 95, which serves as a migration route for snowbirds and other sun-seekers, the Stuffed Beaver regularly caters to Canadians making their way across the border, said Lambert.

Behind the counter hangs a map dotted with the hometowns of visitors from Yukon to Prince Edward Island who have savoured her “grandma’s kitchen food” while travelling through the U.S. South, she said.

“When they hear that there are other Canadians, they get really excited,” she said. “They say, ‘it feels like being home,’ so I know I’m doing something right.”

On Canada Day, the counter-service joint will host a special event for 20 guests to dine on a seven-course feast featuring vol-au-vent, salmon tartare, boeuf bouilli and poor man’s pudding by the light of a candelabra.

It may lack the star-spangled flash of the Fourth of July, Lambert concedes, but she can’t think of a better way to celebrate Canada’s national pride than with a full stomach.

Halfway around the world in Queensland, Australia, Alana and Mike Vandenbrink will be toasting pints of Molson not only to Canada Day, but the third-anniversary of opening Mollydookers Cafe and Bar in the small country town of Apple Tree Creek.

The Aussie-Canuck couple goes all out for the dual celebration, bolstering their sprawling menu of cross-hemispheric cuisine with perogies, dry ribs, pickle spears, smoked salmon latkes and venison.

The eatery also hosts games such as “You’re Welcome/We’re Sorry,” in which photos of Canadian celebrities are tacked to a wall for patrons to sort into one of two categories: cultural ambassadors the world is grateful for, and those who bring shame on our country’s reputation.

The Tragically Hip is permanently fixed in the “You’re Welcome” bracket, they said, while Nickelback is stapled under the heading, “We sincerely apologize. Please forgive us!”

But the Vandenbrinks note other iconic artists can be divisive, with fans and haters switching Shania Twain and Celine Dion from side to side throughout the day.

The Vandenbrinks named Mollydookers after the Australian slang term for southpaw in a wink to Alana being left-handed.

The two met when Alana was an Australian exchange student at the University of Waterloo, and Mike, who grew up near London, Ont., was her bartender. Or, as they like to joke: “So a left-handed ‘roo and a right-handed moose walk into a bar…”

This origin story is emblazoned in the restaurant’s logo of a moose-versus-marsupial boxing match. But in reality, Alana Vandenbrink said the relationship between their respective homelands is more adoring than adversarial.

Despite being roughly 14,000 kilometres apart, many Australians see Canada as a kindred country, she said.

“There’s a lot of Aussies that come in probably more passionate than the Canadians, which is not something we expected,” she said.

When he opened BJ’s Canadian Bar in southern Portugal two decades ago, Pat Ferreira says the watering hole’s maple-crested branding was a way to set it apart from the British and Irish pubs catering to vacationers on the Algarve coast.

But Ferreira said the sports bar has evolved into a “home away from home” for the increasing number of Canadian backpackers and retirees taking in the nightlife of Albufeira.

The bar’s slogan is “a taste of the true North in the beautiful South” — a place to root for Canadian sports teams while sipping on Canadian brews and cocktails.

For the international crowd that flocks to BJ’s, he said the appeal is almost “a connection to a dream” for people entranced by Canada’s natural beauty.

Others feel connected through friends and relatives who have moved there, which Ferreira sees as emblematic of the multiculturalism that makes Canada Day a global celebration.

“There’s something about being Canadian that brings us all together in a way that I’ve never seen in any other nationality,” Ferreira said.

“That’s really what makes Canada Day something that everybody wants to be a part of: It’s just a mix of everybody together and acceptance of everything we are.”