Your Winnipeg Goldeyes Memories: ‘Messing Up My Butt Groove’

Contributed by the Winnipeg Goldeyes for ChrisD.ca 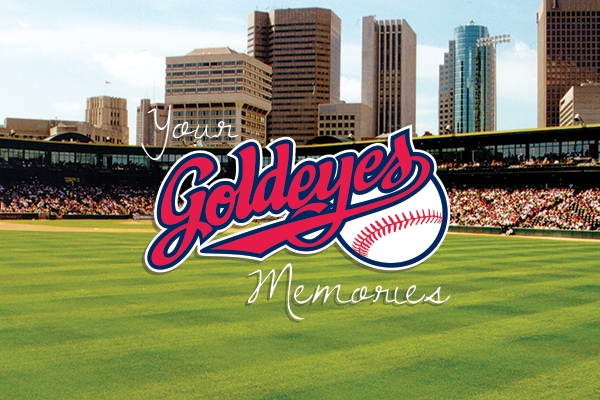 In 2007 I made a choice that would change my life forever.

I got season tickets for the first time not knowing it would change life as I knew it.

I’d gone to many Goldeyes games over the years starting back when I was fairly young with my dad at the old football stadium.

Over the next few years, I met a few people I now consider family and in 2012, after a hilarious encounter with a complete stranger, I found someone who would quickly become very important to me. This is how we met. As a season ticket holder, I quickly became very protective of “my seat.” While at a game in a sky-suite I noticed someone sitting in my seat. I made a comment to my friends that someone should go down there and kick that person out of my seat as he was ruining my “butt groove.” They all laughed because they knew I was just joking around. The evening continued on with the odd comment about this person still sitting in my seat.

The next day I was back at the park in my usual seat when this young guy turns to me and says, “Those are great seats, we sat there yesterday because some guys were in ours.”

I laughingly responded with, “So you’re the guy (I used a stronger word) that was in my seat messing up my butt groove.”

He laughed and said, “Yep, that was me, name is Ryan, great to meet you.”

Ever since that fateful day, we have been the best of friends and eventual family to one another, and to each other’s families. It has also remained an ongoing joke between the two of us whenever we are out together.

In the years since that meeting, we have gone to many games together including witnessing the Goldeyes win the AA Championship on home field. That was an experience neither of us will ever forget and his young son will now be joining us for many games in the very near future. Hopefully with any luck his son will play for the Goldeyes one day!