Occupants of Amateur-Built Helicopter Uninjured After Craft Rolls and Burns 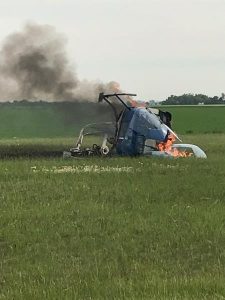 STEINBACH, Man. — Authorities say two occupants of a recreational helicopter escaped injury after the machine rolled onto its side and burst into flames on Saturday.

Chausse says when they arrived, they saw the small, home-built helicopter burning about 300 metres from the main runway.

He says the two occupants — a man and a woman — got out on their own and weren’t injured.

Chris Krepski of the Transportation Safety Board says the helicopter was on the ground and not airborne when the incident occurred, and the fire happened after the machine rolled.

Krepski says the board will not be investigating.

“Typically we would investigate if there was a good chance that we’d learn something to enhance safety or if there was fatalities and we couldn’t get information directly available,” Krepski said.

Krepski said he doesn’t know if the aircraft was about to take off or had just landed.

Chausse said its believed the helicopter was owned by a local resident.