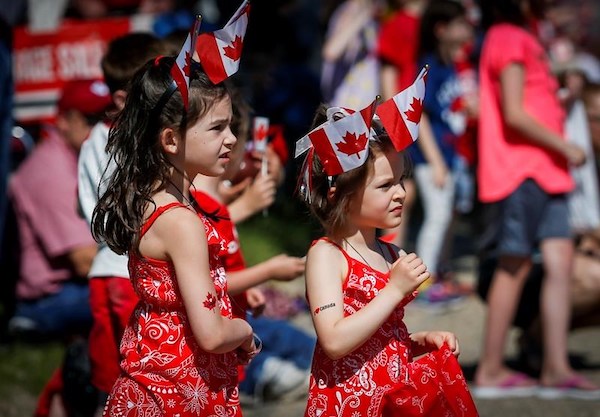 OTTAWA — Prime Minister Justin Trudeau delivered a campaign-style speech focused on his Liberal government’s successes over the last four years as he delivered his Canada Day remarks on Parliament Hill on the country’s 152nd birthday.

Speaking to a jovial crowd clad in red and white gathered under a hot sun, Trudeau reminded the assembled masses about last year, when he skipped the festivities in the nation’s capital and instead visited communities impacted by steel and aluminum tariffs that had been imposed as part of a trade dispute with the United States.

In those communities, Trudeau said he saw people helping and supporting one another — a key Canadian quality to celebrate, he said.

But he also dropped a not-so-subtle reminder of how his government was able to renegotiate a new free trade agreement with the United States and Mexico, and eventually got the U.S. tariffs lifted.

“We put up a united front, we leaned on each other, we had each other’s backs and we didn’t get pushed around,” Trudeau said.

He also highlighted some rosy numbers sure to be regularly touted in the upcoming election campaign: the number of jobs created since his Liberals took office in 2015 — one million; the number of long-term boil-water advisories lifted since 2015 — 85; and the number of kids who have been lifted out of poverty — nearly 300,000.

His support for diversity was also a focal point of his remarks, saying he is proud to be part of a country that values multiculturalism while also looking to the future to meet what he called “the great challenges of our times” — climate change, reconciliation and gender equality.

“As a country, it’s important that we celebrate our accomplishments, that we take pride in how far we’ve come. But we can’t forget that Canada did not happen by accident and won’t continue without effort and hard work. We can and we must continue to make our country even better,” he said.

“I have no doubt that together, we can continue to build a country we can all be proud to call home.”

Trudeau wasn’t the only high-profile Canadian at Ottawa’s celebration, which Ottawa police said swelled to approximately 16,000. In addition to Governor General Julie Payette and a smattering of cabinet ministers, actor Ryan Reynolds watched the festivities from the VIP section on Parliament Hill.

And astronaut David Saint-Jacques, freshly back from a stint in space, made a surprise video appearance from a hospital in Houston, TX., where he’s recovering from his trip back to earth.

In rainy Halifax, meanwhile, the occasion was marked with a 21-gun salute on Citadel Hill, sending the sound of cannon blasts echoing through the sky like thunder.

Jihan Estrella was happy to be in Halifax for the holiday after immigrating to Canada from the Philippines just a month ago.

“Even if we don’t know anybody, we talk to people at church and they help us with what we need. I think that’s something Canada has that we’re very fortunate to have experienced,” she said.

Torontonians had their pick of celebrations like the annual Yonge-Dundas Multiculturalism party, which celebrated the country’s diversity with jazz bands, a “Parade of Nations” and live performances from multicultural groups.

Terence Hampton Junior, 21, was visiting Toronto for the first time on a family vacation from Memphis, TN, when he found the Yonge-Dundas celebration. The differences between Toronto and his hometown, he said, are palpable.

“Going around in different places and just seeing all of these people of different colours and different races and backgrounds together and just enjoying each other’s presence, that’s something that’s really important I think that Canada symbolizes well,” said Hampton Junior.

Fabiola Peoraza, 30, was also celebrating her first Canada Day in Toronto after immigrating to Canada from Mexico in 2017.

“I think it’s very easy to live here and be part of the culture and society because you have people from all around the world,” she said. “It feels like you are part of this country and you can share it.”

Though the celebrations were little less grand than they were two years ago for the country’s sesquicentennial birthday, 2019 is an anniversary year of sorts: the 140th official holiday celebrating Confederation.

For the first dozen years that Canada was a country, there were no official celebrations, thanks in part to Nova Scotia politicians who felt they had been forced into Confederation, said Matthew Hayday, a history professor at the University of Guelph.

At a parade in the East York area of Toronto, which was advertised as the city’s longest-running Canada Day celebration, children with painted faces and dressed head to toe in red and white ran up and down the roads blowing bubbles in small capes made of Canadian flags.

“It’s our heritage, it’s our history, and it represents a society that I think the world wants to be,” said Dennis Marangos, 60, a life-long East York resident who said he’s never missed a parade.

— With files from Halifax and Toronto.