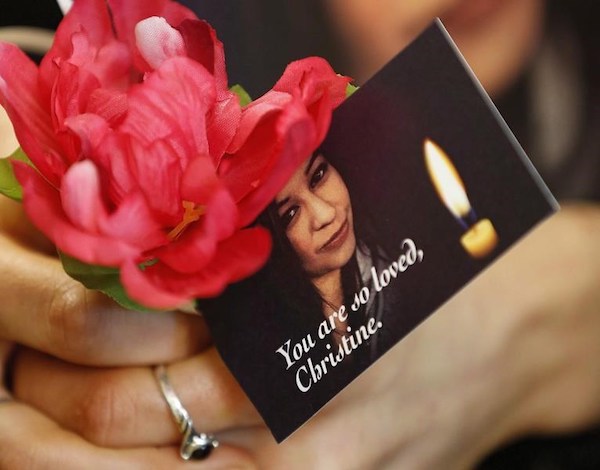 A woman holds a flower and a photo of Christine Wood during a vigil in Winnipeg, Wednesday, April 12, 2017. (THE CANADIAN PRESS/John Woods)

WINNIPEG — The father of a woman who was stabbed numerous times and her body discarded in a shallow grave says he’ll never stop hurting, even though her killer has been sentenced to life in prison with no chance at parole for 15 years.

Brett Ronald Overby, 32, was found guilty in May of second-degree murder in the death of 21-year-old Christine Wood.

At a sentencing hearing Tuesday, a judge said Overby committed a brutal and relentless murder then went on with his life, and even continued using the dating website where he met Wood, until he was arrested.

George Wood said outside court that the life sentence won’t bring his daughter back.

“It’s not going to take away the pain. It will always be there,” he said.

“If there was something I could say to my daughter right now, ‘I miss you. I wish this didn’t happen to you. … If only I was there to protect you.'”

He described his daughter as beautiful, intelligent and kind with a rich, full life ahead of her — until she met Overby through the dating site Plenty of Fish.

Christine Wood, who is from Oxford House First Nation in northern Manitoba, was in Winnipeg with her parents in August 2016 when she disappeared from the hotel where they were staying while in the city to support a sick relative.

Her parents stayed in Winnipeg for months searching for their daughter and hundreds of people attended a march to bring awareness to her disappearance.

Wood’s body was found 10 months after she went missing near a farmer’s field outside the city.

Evidence showed that she was stabbed 11 times, her throat was slit and her skull and leg were broken.

The jury heard during the trial how Overby and Wood met through the dating site. They decided to go for a few drinks and ended up at Overby’s house.

Overby testified that Wood began acting erratically. He said she came at him with a knife after he took her down to his basement to show her a mouse skeleton.

He admitted to killing Wood but said he blacked out and didn’t remember what happened. Blood evidence was found all over his basement.

When given the opportunity to address the court Tuesday, Overby said he never intended to kill Wood.

“I really do feel terrible for what happened,” he said.

Court of Queen’s Bench Justice Chris Martin rejected Overby’s assertion that he was provoked and had no memory of the killing.

“I see no genuine remorse, but rather regret for being caught.”

Wood’s family told the hearing that she didn’t deserve to be left in a shallow grave like garbage.

Wood’s brothers, cousins and friends also submitted victim impact statements that described the anxiety and fear they have experienced since her killing. They said they worry for their own children, especially when they have to go to Winnipeg.

Garrison Settee, grand chief of Manitoba Keewatinowi Okimakanak, which represents northern First Nations, said Wood’s legacy should be honoured by implementing the calls to justice from the final report of the national inquiry into missing and murdered Indigenous women and girls.

Hilda Anderson-Pyrz, who works with families of missing or murdered relatives form northern Manitoba First Nations, added that there needs to be more supports for Indigenous people coming to the city. Many have not experienced life outside of their communities and can be vulnerable.

“We need to remember we cannot stop working to improve the safety of our young Indigenous women and girls,” she said. “We need to work together to protect them.”