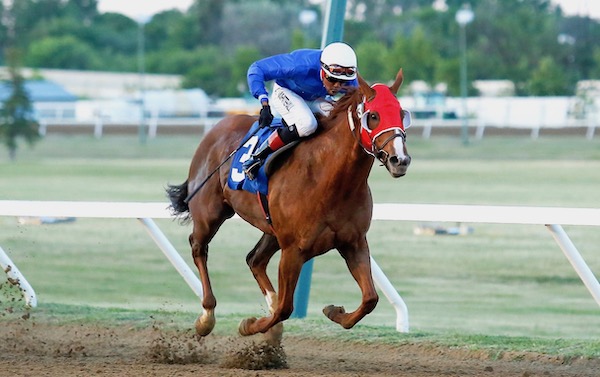 On a night when Gary Danelson’s Tadaa won the big stakes race, one of Assiniboia Downs’ top Caribbean riders stayed in the hunt for the jockey title.

It was Danelson who made the most noise on Canada Day with his win in the $30,000 Canada Day Stakes, but while Alex Cruz extended his lead in the jockey standings, it’s apparent only Richard Mairs and defending champ Antonio Whitehall are mounting a challenge as we approach the midway point of the season next Wednesday night.

In the big stakes race, Danelson, who is in his 62nd season as a Downs trainer, prepared the five-year-old chestnut mare Tadaa so well that she returned to the winner’s circle by demolishing the field in the Canada Day Stakes. Ridden by Whitehall, she beat the runner-up, Settle Down Eileen with Mairs in the irons, by a full length. However, she beat every other filly and mare in the race by at least eight lengths. Danelson, the all-time leading trainer at the Downs by a country mile (he set the standard in 2001), will be 82 on Aug. 28, and while his barn is a little smaller, he shows no signs of slowing down.

With the win, on another daughter of Going Commando (a list of daughters that includes current stars Escape Clause and Hidden Grace), Whitehall moved solidly into third place in the jockey standings all by himself.

Mairs, meanwhile, won twice on Canada Day, as did the leader, Alex Cruz, so the Downs essentially have a three-horse race in the jockey standings at the near-midway point of the 2019 meet.

For Mairs, who came to the Downs from his home in Jamaica four years ago, his success in 2019 has been all about hard work.

“I think maybe my success is due to the fact that it just might be my time,” he said. “But I’m a hard-worker and I’ve been doing this for a few years now. I’m here early every day and the owners and trainers really like my work ethic. I treat everyone with respect and I like to talk with everyone here. It doesn’t matter if you have 10 horses or two horses or 30 horses, I treat everyone respectfully.

“Because I have a good agent and I have been able to develop a good reputation, I’m getting more rides and better rides. It’s been better this year because my agent pointed out a couple of mistakes that I made a couple of years ago and I also got some very good advice from a trainer I ride for, Tom Gardipy Jr. So, I’ve been working on the advice they give me and I’ve eliminated the mistakes and people see that I’m working hard, adapting and I’m getting more and better rides.”

Two weekends ago, Maris, now 32, rode four Gardipy Jr. horses to victory in one of the great days for any jockey at the Downs. It prompted the Jamaica Observer to write: “Mairs joined the ranks of Dane Nelson at Century Mile, Javour Simpson at Fairmouth and Trevor Simpson at Lethbridge carrying the Jamaican flag with honour on the international race riding circuit.”

“I was 22 when I started riding in Jamaica in 2009,” Mairs explained. “I race there for six years and then four years ago, I started coming here. I’m the first person in my family to be around horses. I started at Caymanas in Jamaica. I grew up an hour and a half drive from the track but after I was introduced to the track and started riding, I got a place five minutes from the track. The first time I got on a horse, I was 21 and I rode my first race later that year in an exercise rider’s race. My first race as a professional jockey was when I was 22.

“When I was a bug, I was the champion apprentice in Jamaica. I did well back home but I needed to venture elsewhere. I needed to go somewhere else to get a different perspective. Two jockeys named Garfield Dunkley and John Mills introduced me to Darren Dunn. They asked Darren to do me a favour and bring me here just to get some experience. He said he would give me a shot in 2016 and that was it.”

When the season ends in Winnipeg in September, Mairs will head back to Jamaica to race. It’s nice to be able to go home and still get plenty of mounts.

Mairs agent, Dave Brockhill summed up Mairs’ season-best when he said, “Somebody said last year that Richard was just a helmet (a reference to the fact all jocks wear helmets). This year, he’s the shiniest helmet at the Downs.”

Because of the Canada Day races, there is no live racing scheduled for Wednesday this week. Live racing returns to the Downs on Friday night — the 23rd day of racing this season — at 7:30 p.m.