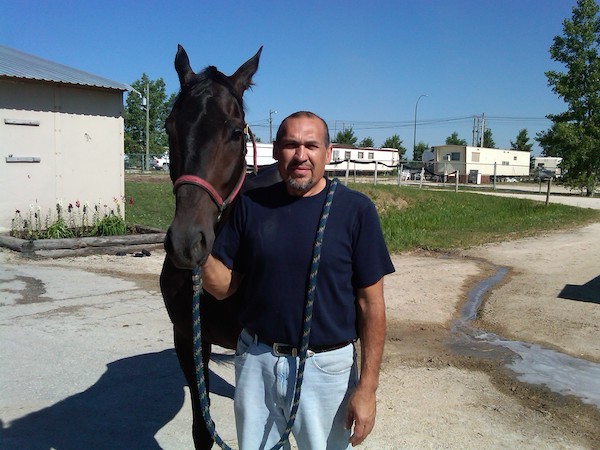 The defending champion trainer at Assiniboia Downs is right back in the hunt.

As we approach the midway point of the 2019 Meet, veteran trainer Jerry Gourneau from Turtle Mountain Chippewa Reserve near Belcourt, N.D., has move into third place in the trainers’ standings, thanks in no small way to the fact he won four races on Friday night and then claimed the RJ Speers Stakes on Saturday.

Then, on Saturday, his biggest longshot of the weekend, Deep Explorer upset an impressive field to win the $30,000 RJ Speers Stakes, his first stakes win since mid-August of 2017. Deep Explorer returned $25.50 on a $2 wager and according to Downs handicapper, Ivan Bigg jockey Chavion Chow rode brilliantly, “Chow saved ground then pulled out to best three others in a thrilling stretch-long drive, the best of the season.”

Interestingly, a bettor in Chicago won US$6,553 in the Super Hi-5 Pool thanks to Deep Explorer’s upset win.

Gourneau is a veteran at the Downs and one of the finest trainers’ in ASD history. In fact, he’s been in the horse racing business for almost his entire life. In fact, even while completing his Masters’ Degree in Education, even while spending time as a school administrator and even as an administrator for a major National Science Council Grant in the United States, Gourneau has always kept his hand in the racing industry.

These days, however, there are no more distractions. Since deciding in 2009 to leave the education profession, Gourneau, 59, is a full-time trainer and for a man who has been working in the equine game for more than 40 years, it’s never been as much fun as it is right now.

Born and raised on the Turtle Mountain Chippewa Reserve, about 170 miles southwest of the International Peace Garden, Gourneau and his family would drive to Winnipeg to watch the horses run and then drive home on the same night – three hours both ways.

“My dad, Larry Gourneau Sr., got together with my older brothers, Dave and Bill, and they bought one horse,” Gourneau explained. “He was named Sima’s Award and we bought it from Assiniboia Downs in 1972 or ’73. My dad bought it to run on the bush tracks in Pheasanton, Towner and Rugby, N.D. Belcourt didn’t even have a track back then.

While going to school, Gourneau soaked up track life. He worked the barns, he groomed, he galloped horses and was even a jockey on the bush tracks. He’d come to Winnipeg after school ended and live in the No. 9 tack room. His first boss at the Downs was an old trainer named Burnell Rhone.

After college, he went on to university to get his Masters’ in Education. He worked his way through school by working for the family racing business, Gourneau Brothers Racing, and by hitting big bets at the Downs. In fact, he bet $100 on a horse called Crime Zone and won $2,750. It paid for more than a semester at school.

After graduating from university, he went on to become a schoolteacher and later, a school administrator. Meanwhile, he worked summers in the racing game. In 2009, he decided to go into the thoroughbred industry on a full-time basis and he has been a remarkable success. Now, one of the greatest aboriginal trainers in racing history will head into the mid-way point of this year’s ASD meet with a good shot at defending his trainers’ crown.

Racing resumes on Friday night at 7:30. The start time is the same for Saturday night. Gourneau will have three horses going on Friday night including the very interesting three-year-old Manitoba bred, Purrsibility in a $13,400 allowance race (Race 5). On Saturday night, he’ll saddle up five horses including the favorite in Race 6, Witt’s Grand (7-5) with Arthur Budhu in the irons.