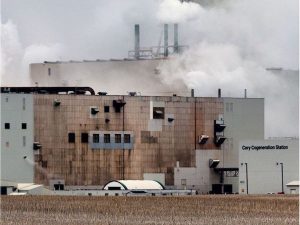 SASKATOON — A fertilizer company says all 34 people who were trapped deep in a Saskatchewan potash mine for more than a day are now safely above ground.

Will Tigley, a spokesman with Nutrien Ltd., said a service shaft stopped working at its Cory mine near Saskatoon on Tuesday.

On Wednesday evening, the staff took a separate elevator normally used to transport potash to the surface.

“We are happy to confirm that we have all of our 34 people above ground,” he said.

“For the most part, all of our employees were in good spirits and we got some of our other employees to drive them home to their families.”

Tigley said no one was hurt.

“We went with the best option available to use and we chose the safest and most efficient one.”

He said the workers, who were about a kilometre underground during the ordeal, were safe and had plenty of food, water, power and contact with the surface.

Tigley said the workers were performing maintenance when they became trapped.

The Cory mine is not currently producing potash.

He said the cause of the mechanical problem will be investigated.

“We will investigate the cause, take the right precautions to ensure that it doesn’t happen again,” he said. “There were no injuries.”

Darrin Kruger, a staff representative with the United Steelworkers union, said because there was no emergency, such as a collapse or a fire, he believed the trapped workers didn’t have to be isolated in the mine’s underground safe rooms.

But he said there are still dangers with being underground for so long. Workers could have a medical emergency or run out of required medication.

“Underground is a confined space — one way in, one way out. And when that is compromised in some fashion, there are inherent risks.”

In May, dozens of Nutrien workers were trapped for several hours at its Allan potash mine after a fire broke out before they were safely brought to the surface.