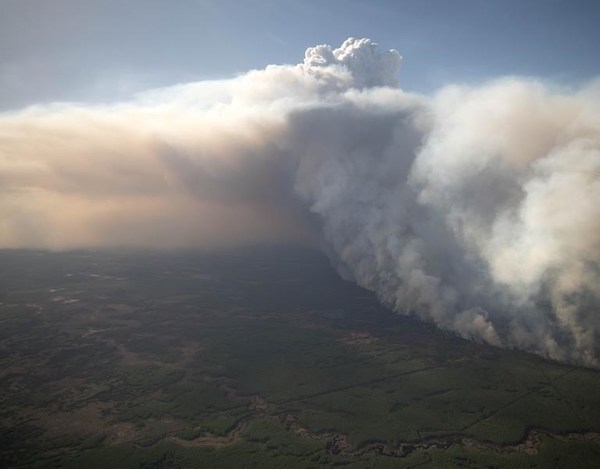 A fire burns near High Level, Alta. on May 21, 2019 in this handout photo. Similar conditions are present in northwest Ontario, creating hazy conditions in Manitoba and prompting special air quality statements from Environment Canada. (THE CANADIAN PRESS/HO, Chris Schwarz, Government of Alberta)

WINNIPEG — The Manitoba government says winds are pushing smoke from northwest Ontario into the province.

Environment Canada has issued special air quality statements for much of eastern Manitoba on Saturday, including Winnipeg, stating that elevated pollution levels are expected or are occurring.

One blaze, dubbed Red Lake Fire 23, is burning south of the community of Keewaywin, Ont., and has forced its 450 residents to be evacuated from the community over the course of the week.

By Friday it was estimated to have grown to 582 square kilometres in size.

Environment Canada says air quality in Manitoba is expected to improve Sunday when a southwesterly flow develops and helps move the smoke eastward.

It says in the current conditions, even healthy people may experience sore eyes, tears, coughing and a runny nose.