Home » Entertainment » Bryan Adams Brings the Summer of ’69 to Winnipeg

Bryan Adams Brings the Summer of ’69 to Winnipeg 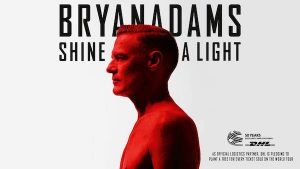 Who needs an opening act when you are a Canadian music legend like Bryan Adams?

At exactly 8:20 p.m. at Bell MTS Place Monday night, the Canadian music icon took to the stage and didn’t skip a beat before lighting up the huge crowd that excitedly welcomed him. Within minutes, the Kingston, Ontario native grabbed the audience’s attention with “Can’t Stop This Thing We Started.”

And for the next few hours, Adams held on to that attention, always encouraging fans to chime in with him as he belted out songs near and dear to them.

“Hello, you beautiful people of Winnipeg,” the 59-year-old sensation shouted to the crowd as he described the Shine a Light tour which marks his 14th studio album released in March.

He then let the crowd take over the first verse of his hit “Heaven” as the cell phone lights swayed throughout the venue.

Satisfying the crowd with some impressive guitar riffs that had everyone cheering him on during “It’s Only Love” (which he originally performed with Tina Turner, by the way) Adams glided into another huge favourite “Cloud Number Nine.”

The fans were ultimately impressed, whistling and shouting for more. So… he gave them more.

Taking centre stage midway with two other band members, Adams really delivered the huge crowd at Bell MTS Place a fun time with “You Belong to Me.”

I’m pretty sure no one was sitting in their seats at this point. It was tough for this baby of the summer of ’69 to not jump out of her seat.

The audience clapped. The audience sang. They knew all of the words. Then he asked if the show should keep going. The crowd was not ready to go home

And so the show did go on.

As he delivered “When you’re Gone” acapella, the audience went wild.

Then Adams really pulled out the heartstrings and sang “(Everything I Do) I Do It For You.” I’m not sure there was enough tissue in the venue.

And then, who doesn’t need somebody? Adams immediately took the show up a notch with “Somebody.”

It didn’t end there. Hit after hit, one realizes how many top-of-the-chart songs Adams has in his repertoire.

It’s fair to say, the musician who performed in the pouring rain when he played Birds Hill Park in 1992 during the Waking Up the Nation tour was having a great time in Winnipeg this July day… indoors!

Keep in mind, this man is an Officer of the Order of Canada (1998) a member of the Canadian Music Hall of Fame (2006) and was featured on postage stamps celebrating Canadian top recording artists.

Stirring up emotions with “Coming Home” and “Cuts Like a Knife” those who came to see the Canadian rock legend perform did not leave disappointed.

Encore time: 10:14 p.m. included a deliciously gritty cover of “I Fought The Law” by The Crickets. Adams then delighted fans with some tales of his memories of Winnipeg and some freestyle guitar with “Lonely Nights” which everyone lapped up.

After a conversation about the loss of his father, how his mother is in her ‘90’s and frail and how much he appreciated his parents’ love and devotion for him and his daughter, Adams played “Straight From The Heart.” Then the cell phones lit up for his hit “All for Love” from the 1993 movie the “Three Musketeers.”

Cell phones glowing during @bryanadams in Winnipeg. Read my review on @ChrisDca pic.twitter.com/DPdkJAYGHq