By Lidia Abraha, The Canadian Press 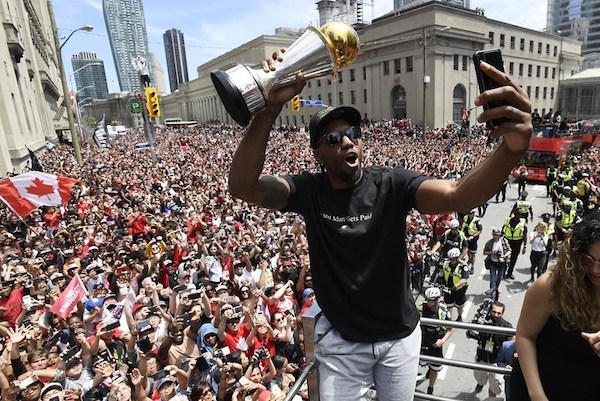 TORONTO — Though his jersey may have said Toronto, Raptors fans across the country — and beyond — are in mourning after star player Kawhi Leonard opted to leave Canada’s only NBA team.

The two-time NBA Finals MVP, who joined Toronto’s team just a year ago when he was traded by the San Antonio Spurs, has reportedly signed with the LA Clippers after carrying the Raptors to the NBA Championship for the first time in franchise history last month.

William Om, a 27-year-old Raptors fan from Montreal, said it’s painful to see an elite player come to Canada only to leave after such a brief period.

“It hurts everybody, because of course we want to keep the best players,” he said in a phone interview.

But he said Leonard has won over his allegiance, regardless of where he takes his talents. In fact, Om said he’s already ordered a Clippers jersey with Leonard’s name on the back.

“What happened in Toronto, the way he played and everything, made me admire him a little more,” he said. “No matter where he goes I’ll support him as a Clipper.”

But while some fans such as Om are grateful for Leonard’s efforts — #ThankYouKawhi was trending on Twitter Saturday after news of his departure broke — others are not so generous.

Andrew Ostasz, 33, of Hamilton said he was “disgusted” with the way Leonard left the team.

“The Raptors brought him here to give him every chance to succeed … basically turned him into the top three player in the league,” Ostasz said.

That sentiment was echoed by Manuel Lutz, who would sometimes wake up in the middle of the night to watch the Raptors play from his home in southern Germany.

But Lutz said his heart has softened in the time since the news came out. He now sees that it’s best to let Leonard go.

“There is a saying in Germany, ‘do not keep travellers from travelling’, and that’s the way I see the position right now,” he said.

As the acceptance begins to settle in, fans are turning their attention to all that Leonard brought to the Raptors in his short time in Toronto.

“You can’t really be mad because he gave you the one thing that we wanted,” West said. “It shouldn’t tarnish his legacy because he did the one thing no one else really could and that was to lead us to a championship — So I think he should be remembered fondly.”

—With files from Olivia Blackmore in Halifax, Morgan Lowrie in Montreal and Brenna Owen in Vancouver.

← Previous: The Games That Adults Like To Play Next: Silva Back on Top at Assiniboia Downs →
Tags: Basketball | Canada | Ontario | Toronto