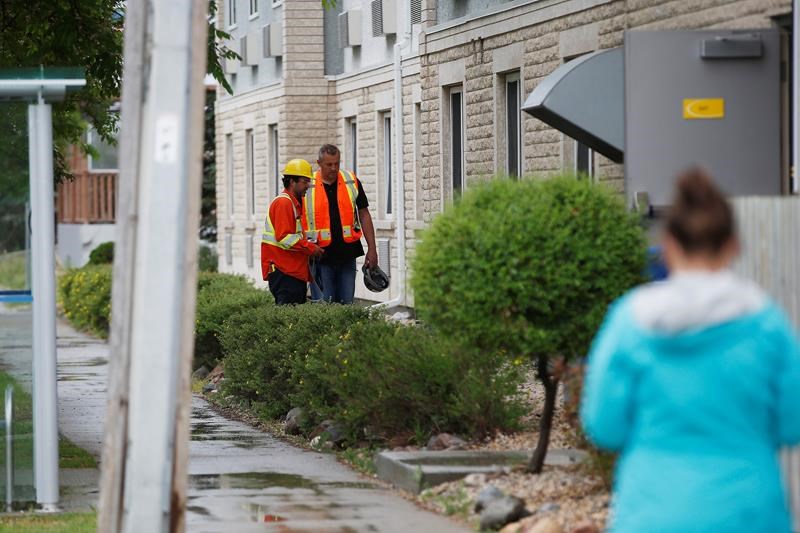 Gas workers check air quality at ventilation vents after emergency personnel were called to a gas leak at a Super 8 hotel in Winnipeg Tuesday, July 9, 2019. Forty-six people were taken to emergency hospitals. (THE CANADIAN PRESS/John Woods)

A carbon monoxide gas leak at a Winnipeg Super 8 hotel has sent 46 people to hospital — 15 of them in critical condition.

Emergency crews responded to the hotel at 3786 Portage Avenue at around 10:19 a.m. Tuesday, where they determined carbon monoxide up to 385 parts per million throughout the building. An automatic alarm indicating carbon monoxide originally triggered the emergency response.

The building was evacuated and people with taken to hospital in varying conditions. A spokesperson for the Winnipeg Fire Paramedic Service says five of those are in unstable condition.

Fifty-two people and one dog were in the hotel at the time. The animal is being cared for by Winnipeg Animal Services.

Steve Brglez, acting platoon chief, says it’s not expected any of the patients will die from the gas exposure.

“We don’t expect any fatalities from this,” he told reporters Tuesday.

“Several of the (hospital) transports were precautionary just to ensure that everybody gets checked out and gets continued readings over the next two to three hours for the levels of CO in their blood.”

Manitoba Hydro is working to determine a cause of the leak and has shut off gas to the building.

Alex Forrest, president of United Firefighters of Winnipeg Local 867, called the leak a nightmare scenario, but said it could have been a lot worse.

“We’re in an area where we have a very quick response of firefighters,” he said. “We were able to be here within minutes.”

He said the fire trucks were equipped with devices to test the air quality.

“That’s when they found extreme levels of carbon monoxide,” he said.

“We just hope there’s no deaths that result from this.”

In a tweet, the Victoria Inn Hotel said it would be offering 10 complimentary rooms to displaced Super 8 guests that could provide their confirmation letters.