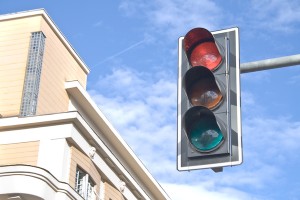 Confusion Corner may become a little more confusing for commuters Wednesday morning as traffic lights at the Osborne and Pembina intersection remain out.

The outage began Tuesday at around 7:30 p.m. and carried over into the morning, prompting Winnipeg police to issue a warning to motorists to use caution or avoid the area. Winnipeg was hit by a heavy rainstorm overnight, causing water to pool on streets and accumulate at several underpasses.

Crews from Manitoba Hydro and the city remain on scene to conduct repairs, while police cadets have been directing traffic.

Police say if the outage lasts later into the morning, additional police officers will be utilized to direct traffic.

It’s unknown what caused the outage or when the lights will begin functioning again.

*All traffic lights at Confusion Corner (Osborne/Pembina) are out*

Hydro and Signals are on scene with WPS Cadets providing traffic duty. Please use exercise caution and patience as you approach this area or avoid it if possible.