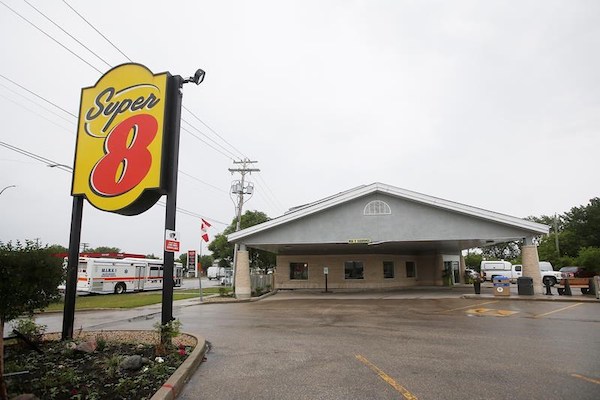 Emergency personnel were called to a gas leak at a Super 8 hotel in Winnipeg Tuesday, July 9, 2019. Forty-six people were taken to emergency hospitals. (THE CANADIAN PRESS/John Woods)

WINNIPEG — Insufficient ventilation is the suspected cause of a carbon monoxide build-up that forced the evacuation of a Winnipeg hotel this week and sent 46 guests and staff to hospital.

“It appears carbon monoxide in the building built up because of inadequate ventilation related to gas-fired appliances. Instead of being safely vented, exhaust was being drawn back into the building,” Chuck Steele, Manitoba Hydro’s director of engineering and, told reporters Wednesday.

“We still have significant further testing to do to pinpoint why this happened.”

All 46 people were discharged from various hospitals within 24 hours of Tuesday morning’s evacuation.

Although more than a dozen were initially listed in critical condition, no one required intensive care or intubation, and most were either quickly released or kept briefly for monitoring, health officials said.

The gas was detected in the boiler room of the three-storey Super 8 hotel on the western edge of Winnipeg. A carbon monoxide detector went off and fire and ambulance personnel responded within minutes.

The carbon monoxide levels were as high as 385 parts per million, Lane added — exponentially higher than levels at which the gas can become dangerous with prolonged exposure.

“But what I can say is that when the detection occurred, we were able to intervene on all of our patients when they were in a condition that certainly required intervention, but required minimal intervention.”

The investigation will examine which equipment was the source of the problem, how long the gas may have been building up and whether the hotel had the right type and number of carbon monoxide detectors.

Some hotel guests said they were feeling dizzy and nauseous before the evacuation began.

The hotel’s owner, Justin Schinkel, said Tuesday that the Super 8 had passed a fire inspection and never had a carbon monoxide leak before.

Lane said the hotel passed an inspection that included a look at its carbon monoxide detectors in 2017. Its next inspection was due in 2020.