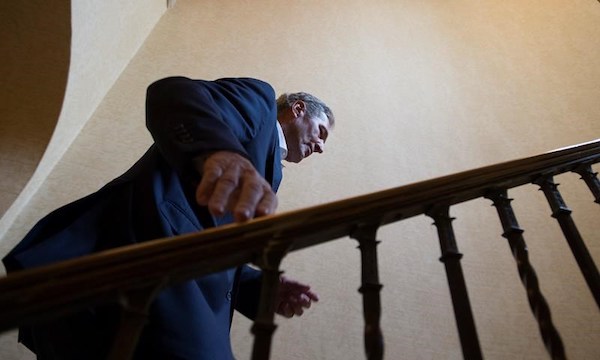 Manitoba Premier Brian Pallister goes up the stairs after addressing the media during a meeting of Canada’s Premiers in Saskatoon, Wednesday, July 10, 2019. (THE CANADIAN PRESS/Jonathan Hayward)

The two premiers are attending an annual meeting of provincial and territorial leaders in Saskatoon.

Pallister has called Quebec’s legislation “dangerous” and “un-Canadian” and says he believes it has the potential to be oppressive.

The Quebec law bans teachers, police and other public servants in positions of power from wearing religious symbols, and critics say it unfairly targets Muslims, Sikhs and other religious minorities.

Pallister said he has spoken to other premiers about his concerns with the law and he will personally talk with Quebec Premier Francois Legault about them before the meeting wraps up Thursday.

Speaking out is the right thing to do, he said.

He said he believes the Quebec law singles people out based on appearance, and he knows what that feels like.

“I was six-foot-three in Grade 7 in a small school, so you could guess about how that worked in the schoolyard,” Pallister said.

Legault said the subject hasn’t been raised at the meeting so far and he believes the law is a matter that should be left to Quebec residents and its premier.

He said Pallister is entitled to his opinion.

“I agree to disagree.”