Home » The Canadian Press » Bombers Defence Off to Great Start, Looks to Keep Rolling Against Argonauts

Bombers Defence Off to Great Start, Looks to Keep Rolling Against Argonauts 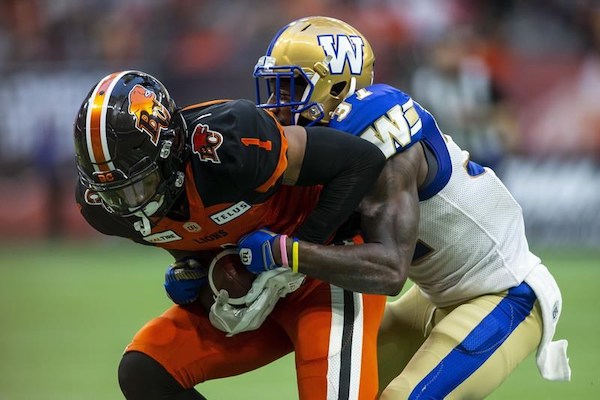 WINNIPEG — Brandon Alexander hasn’t forgotten the criticism heaped on the Blue Bombers’ defence the past few seasons, but he’s glad this year has started off different.

Winnipeg is the only unbeaten team in the CFL and its defence has played a huge role in the 3-0 record.

The defence goes into Friday’s game against the winless Toronto Argonauts (0-3) without giving up a touchdown in the past two games (nine straight quarters) and has only allowed one this season.

“Of course in 2017 and 2018 we were definitely criticized for giving up a lot of yards and touchdowns during the year,” said Alexander, a defensive back in his third year with the Bombers.

“Even with the wins and us being able to go to the playoffs, at the end of the day there were certain games where we just did not stop the opponent and that criticism was right.

“We’ve got to keep building every single year and this year is starting off really good in terms of not giving up a lot of explosion plays, not giving up touchdowns. We want to come out here as a defence and have a goose egg on the table. Now is that hard to do? Of course. But that’s what we come out here to do.”

Winnipeg’s offence is carrying its share of the load, scoring four touchdowns in each of its three victories.

That balance has head coach Mike O’Shea happy, but not entirely satisfied.

“We’ve had some good success so far, but I don’t think we’re playing our best football by any means,” he said.

Toronto lost to B.C. 18-17 last week after Lions kicker Sergio Castillo recorded a single off a missed field-goal attempt on the final play of the game.

It was the first start of the season for Argonauts quarterback McLeod Bethel-Thompson, who replaced James Franklin (hamstring) after he went on the six-game injured list.

Bethel-Thompson acknowledged he has a lot of weapons on offence.

“Unlimited, across the board, six deep. And it’s even deeper on the sidelines so it’s really exciting,” he said. “It’s a great position to be in. They make my job really easy.”

Now it’s just a matter of getting in sync with those weapons.

“We’re really close. We’re closer than people think we are,” Bethel-Thompson said. “We’re just playing one play at a time and everyone doing their one job and no one letting the rope go and it’ll come together.”

Toronto head coach Corey Chamblin said his players aren’t down on themselves and he’s seeing improvement.

Going up against the undefeated Bombers is a good challenge.

“That’s a great thing,” Chamblin said. “I told those guys, I said, ‘Right now Winnipeg is a well-oiled machine.'”

But that doesn’t mean the Bombers can’t sputter.

“It’s not like their guys are any greater or anything,” Chamblin said. “They’re just playing better because they understand what they’re doing. Like any other thing in football, you’ve still got to play the game so that’s the good thing.”

“I’ve been in this league long enough that the records sometimes can be skewed or misleading and when you turn on the film they’re a team that plays hard, runs around and plays all over the whistle,” Nichols said. “So, for us, it’s another opportunity to get better and play a tough football team.”

Winnipeg’s defence might be without star middle linebacker Adam Bighill, who missed last week’s win over Ottawa because of a hamstring injury. He hasn’t practised this week, but O’Shea said the plan is to have him play.

Bighill will have some input on how he feels and viewed it as a game-time decision. It’s also early in the season so he doesn’t want to push it and pay the price down the road.

“It’s about being smart, it’s about making the right decision for the team and within that there’s some flexibility for how I feel and communication with coach Osh,” Bighill said.

RECORD ON THE LINE: If Winnipeg’s defence doesn’t give up a touchdown for a third straight game, it would be a franchise record. The CFL record is five games by Saskatchewan in 1963.

ROAD WOES: The Argonauts have lost their last 10 road games.