Plane Crashes into Rocks Taking Off from Manitoba Lake 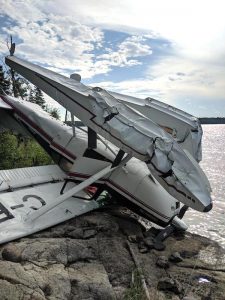 A float plane crashed into a rocky shoreline on Fedirchyk Lake. The pilot was treated for non-life threatening injuries. (RMCP HANDOUT)

RCMP and the Transportation Safety Board are investigating after a float plane crashed on a Manitoba lake Thursday evening.

The plane was taking off from the remote lake when it collided with rocks at around 5 p.m.

Emergency personnel were flown to the crash scene by helicopter roughly 30 minutes later.

The pilot was located at 5:45 p.m. and taken to hospital with non-life threatening injuries. There were no other passengers on board.

“Their help was essential in the rescue due to the remote location of the lake, working collaboratively with Manitoba Sustainable Development was critical for a successful outcome.”