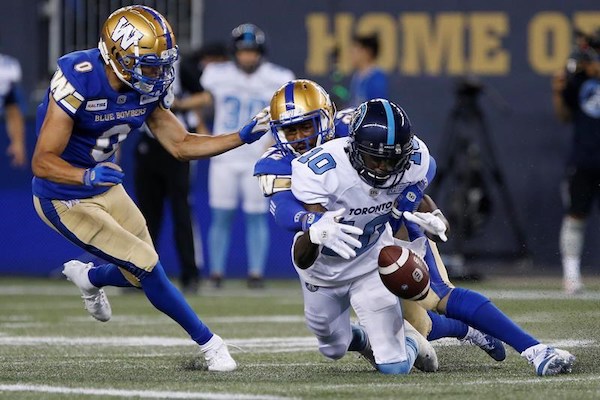 WINNIPEG — Lucky Whitehead savoured every one of the 104 yards he ran on the way to the end zone on Friday.

The Blue Bombers receiver set the tone when he took a kickoff in for a touchdown on the opening play of Winnipeg’s 48-21 dominating victory over the Toronto Argonauts.

“It’s exciting, just to be in that open field and just all the blockers that I had in front of me,” said Whitehead, who missed some of the fourth quarter with an undisclosed injury. “It ignites the stadium, the team. And as you seen, we fed off of that energy.”

Toronto head coach Corey Chamblin said the team shows flashes, but mistakes get in the way of building consistency. Now he has to ensure the players stay focused and motivated.

“Hopefully, there’s more men that’s going to fight than fold because that’s how you get it turned around.”

Kicker Justin Medlock was good on four field goals from 22, 52, 13 and 31 yards, but short on a 48-yard attempt. He made his five converts and conceded a late safety.

“It was a win and we’re happy about it, but we’ve got to be cleaner than that,” said Harris, who had 14 carries for 116 yards. “As an offence we definitely need to be better and close out that game in a better fashion.”

Toronto receiver Derel Walker caught a pair of touchdown passes from McLeod Bethel-Thompson. Kicker Tyler Crapigna was wide on one convert and good on the other. Armanti Edwards had a TD reception, but a two-point convert try failed. The Argos also conceded a single.

Bethel-Thompson said they shot themselves in the foot too many times and he didn’t communicate as well as he could have.

“When we do that well and we are on the same page, we’re dynamic,” he said. “We have a lot of weapons and it showed tonight at times, but when we aren’t that offence and we’re down, it looks ugly.”

A few minutes after Whitehead scored his TD, Winnipeg almost got another kick-return major.

Receiver Charles Nelson took a Zach Medeiros punt 80 yards before being tackled by defensive lineman Frank Beltre at Toronto’s five-yard line. On the next play, Nichols tossed a five-yard TD pass to Harris.

Toronto recovered a Winnipeg fumble, but the change of possession ended with a punt.

Bethel-Thompson was intercepted twice, but Winnipeg couldn’t pad its lead.

Walker’s 31-yard TD catch capped off a five-play, 75-yard drive at 12:11 of the second. It also marked the end of a stingy run by Winnipeg’s defence, which had gone 10 straight quarters without allowing a touchdown.

Medlock finished the first half’s scoring with a pair of field goals.

The second half opened on a bad note for the Argonauts when running back Brandon Burks fumbled on the first play. Winnipeg recovered the ball, but the series ended with Medlock going wide on a 48-yard field-goal try.

The third quarter featured a 55-yard TD catch by Edwards and a failed two-point convert attempt. Medlock booted a 31-yard field goal and Walker hung onto a 44-yard TD pass with one hand at 14:46 to make it 40-19.

Winnipeg’s defence also stopped the Argos three times from the two- and one-yard line for a turnover on downs with 2:56 remaining.

Argos running back James Wilder Jr. fumbled with a minute to go, leading to Streveler’s touchdown.