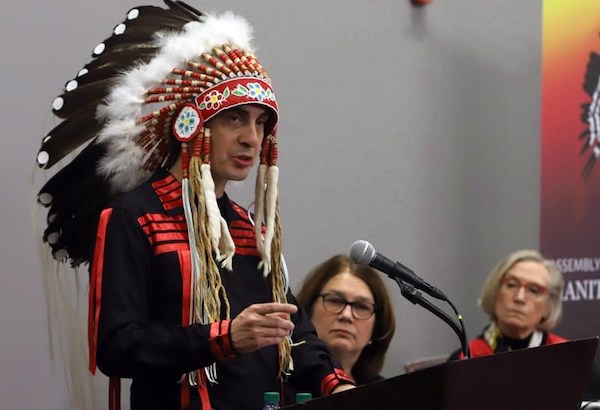 WINNIPEG — A Manitoba Indigenous leader is taking a leave of absence after being accused of sending unwanted messages to a woman.

Grand Chief Arlen Dumas of the Assembly of Manitoba Chiefs says he did not pursue an intimate relationship with the woman but did message her to provide advice and guidance.

In a written statement, Dumas says he apologizes if his actions made the woman feel uncomfortable.

The Assembly of Manitoba Chiefs says Dumas is taking a brief leave of absence and will undergo sensitivity training.

The Aboriginal Peoples Television Network reported this week that a woman who met Dumas in 2018 connected with him on Facebook.

The woman told APTN she chatted with Dumas on Facebook about her job, and alleges that she later began receiving more personal messages from a Facebook account under a different name, which she believed to be Dumas.

She said she also began receiving text messages from a phone number she believes belonged to Dumas, asking her to meet privately.

Dumas said in the statement Friday that the Facebook account was not his, but he did send messages to the woman.

“I did not pursue a relationship of an intimate nature with this woman. I was asked by her for advice and guidance on her path forward. I provided assistance to the best of my professional ability. I messaged her to follow up. I do this on a regular basis with numerous community members, students, and colleagues who often seek out my support.”

Dumas said he has always communicated openly with people.

“Upon reflection, I realize that this style of open and informal communication may not be suited to the role of grand chief,” he said.

“While I was sincerely trying to respond to her requests for support, it is clear from her recent public expression of concern that she did not appreciate our informal message exchange. I apologize if this made her feel uncomfortable.”

The Assembly of Manitoba Chiefs said the controversy has become a “media circus” and that Dumas has also suffered personal tragedies. His son, who had cystic fibrosis, died earlier this year.

“Despite his many losses, he has not taken off sufficient time to heal with his family,” a statement from the assembly said.

“After careful reflection, the grand chief has decided to take a brief leave of absence from his role to heal. During his time away, he also commits to taking active steps to receive counselling for his losses and also engage in professional sensitivity training so that his future communications follow a more formal communication style.”

← Previous: Your Winnipeg Goldeyes Memories: ‘He Doused Us with Champagne' Next: Escape Clause Second in Delaware Handicap →
Tags: Manitoba | Winnipeg