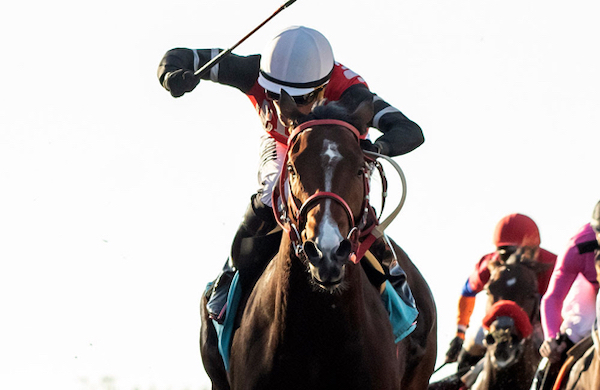 Manitoba’s magnificent mare, the five-year-old Escape Clause, was beaten cleanly down the stretch by the heavily-favoured Elate in Saturday’s 82nd running of the Delaware Handicap.

Elate got out of the gate cleanly and ran right up with the leaders as Escape Clause sat right on the heels of the early leader and local favourite Gotham Gala. Heading around the final turn, jockey Tyler Baze asked for Escape Clause’s best and the Manitoba mare bread by Cam Ziprick and Arnason Farms took the lead took, but only briefly.

Jose Ortiz asked Elate to go and she went, taking the lead coming out of the final turn. The long-striding Elate, a favourite for the Breeder’s Cup Distaff, took command of the race and was so far ahead by the final sixteenth of a mile that Ortiz geared her down to the finish.

Blue Prize, the second favourite at 5-2 rallied from the back of the field and challenged Escape Clause at the wire, but Baze dug in and refused to let his mount give up the place position. Blue Prize, the Argentine-bred, was third.

With the second-place finish, Escape Clause’s owners, trainer Don Schnell, Barry Arnason and True North cashed a cheque for $145,000. She now has a career record of 20 wins, five seconds and three thirds from 33 starts and her earnings are now with earnings of $836,500. In six starts this year, Escape Clause has two wins and two second-place finishes and has won $473,000, more than half of her total winnings and more than she won in three years of racing at Assiniboia Downs.

Elate is red-hot. Trained by Hall of Famer Bill Mott, the five-year-old mare won the Fleur de Lis Stakes at Churchill Downs on June 15, two months after finishing third behind Midnight Bisou and Escape Clause at Oaklawn’s Apple Blossom Stakes on April 14. This was her second straight win at the Delaware Handicap. Going off at 1-5 on Saturday, she paid $2.60, $2.10 and $2.10. Escape Clause (5-1) paid $3.40 and $2.40. Blue Prize paid $2.10.

With another solid finish, Escape Clause has plenty of options going forward. She could remain at Delaware Park or head back to Canterbury in Minnesota. It’s a decision Schnell and Escape Clause’s owners will make quickly.