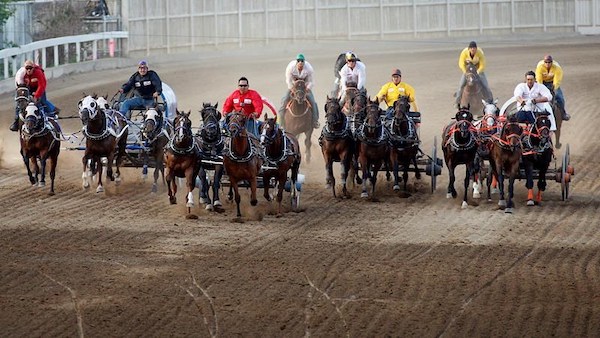 A chuckwagon race is seen during Calgary Stampede in Calgary, on July 13, 2012. (THE CANADIAN PRESS/Jeff McIntosh)

CALGARY — Injuries have forced a veterinary medical team to euthanize three more horses competing in this year’s Calgary Stampede chuckwagon races, bringing to six the number of animals to die during the annual Rangeland Derby event.

Stampede officials say in a website statement that the horses went down Sunday evening in the eighth race when the right lead horse on the wagon driven by Evan Salmond broke a bone in a hind leg.

Two others in the same team were also hurt and despite veterinarians’ efforts, all three animals were euthanized.

Stampede authorities say there will be a review of safety surrounding chuckwagon racing, but it’s not yet known what form it will take.

Last Thursday, Salmond was involved in a collision that resulted in one of his wagon’s horses being put down to a severe leg injury.

Another driver, Chad Harden, was fined $10,000 and barred indefinitely from competing at the Stampede after authorities determined he accidentally impeded fellow driver Danny Ringuette and caused Salmond’s rig to veer into the track’s inner rail.

On Wednesday, a horse was euthanized after it broke a leg during a race, while another animal collapsed and died Monday due to what the Stampede called a medical condition.

“This is as upsetting to us as it is to our community, and is challenging for us,” said the Stampede’s website in reference to Sunday’s crash.

“The Stampede’s commitment to the safety of animals and the conditions of their participation in our events is paramount to our values and brand integrity. We will continue to be open in our communication with our community.”