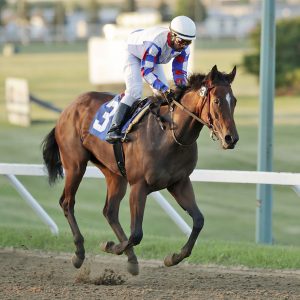 Escape Clause’s baby sister is beginning to look like the next big star. Of course, that’s easy to say when you’re still undefeated.

On Saturday night at Assiniboia Downs, Hidden Grace, the other daughter of Going Commando, won the $30,000 R.C. Anderson Stakes over one mile on dirt with so much ease it simply looked as if she was out for a morning gallop.

In her longest race yet, the unbeaten three-year-old Bay filly beat the rest of the seven-filly field by 11 ¾ lengths as Renaldo Cumberbatch even had a chance to ease off at the finish. Hidden Grace got out quickly, was well-placed inside early in the race, took over outside early in the final turn, opened up and blew the field away. The heavy favourite paid $2.40, $2.20 and $2.10. Sweet Design ($5.80 and $3.10) was second while Remy Rising Star ($4.50) was third.

While most of the experts along the rail believe that this was a tune-up for the Manitoba Oaks on Aug. 2 — and co-owner Barry Arnason has indicated to Downs CEO Darren Dunn that indeed, Hidden Grace is being groomed for the Oaks, not the Derby — it just might have been a preview of the owners’ desire to get Hidden Grace into the Manitoba Derby on Aug. 5. In fact, it was originally thought that Hidden Grace would run in Friday night’s Jack Hardy Stakes, a seven-furlong three-year-old filly race that is usually an Oaks preview. But by entering their filly in the Anderson, a longer race, and by watching her nearly lap the field, owners Barry Arnason, Cam Zipirck and Charles Fouillard might have tipped their hand — just like her older sister Escape Clause, Hidden Grace is Derby worthy.

By the way, Arnason was the big winner in the Jack Hardy Stakes, as well. Arnason, who co-owns Sheena with Don Schnell, watched their filly – a 22-1 longshot – win the $30,000 Jack Hardy with young Dillon Khelawan aboard. Sheena paid a whopping $47.00 to win while Khelawan won his second race in North America aboard a Stakes winner.

Hidden Grace, meanwhile, the beautiful Bay filly by Going Commando (Escape Clause’s father) out of High Power, was bred by Ziprick, Fouillard and Arnason (Ziprick and Arnason bred Escape Clause and Arnason is a co-owner of Escape Clause) and is trained by Michael Nault, the former exercise rider for Escape Clause who has picked up Don Schnell’s Assiniboia Downs’ stable while Schnell keeps Escape Clause company in Delaware.

Hidden Grace has now won all five races that she’s started in her career — two last year as a two-year-old and three races this year — and she’s brought home $68,831 in those five outings. In her three wins this year, she’s won $41,806.

“With her speed, style and what seems like push-button acceleration, this filly leaves you with the impression she has nothing but blue skies ahead,” said Downs. CEO Darren Dunn. “Though she is lightly raced, she already appears to be dominant in the three-year-old filly category.”

Racing continues at the Downs tonight with the first post at 7:30 p.m. As well, there is racing this weekend, both Friday and Saturday night at 7:30. On Saturday night, it’s the $30,000 Manitoba Mile for the best older horses on the grounds. Should be a dandy.