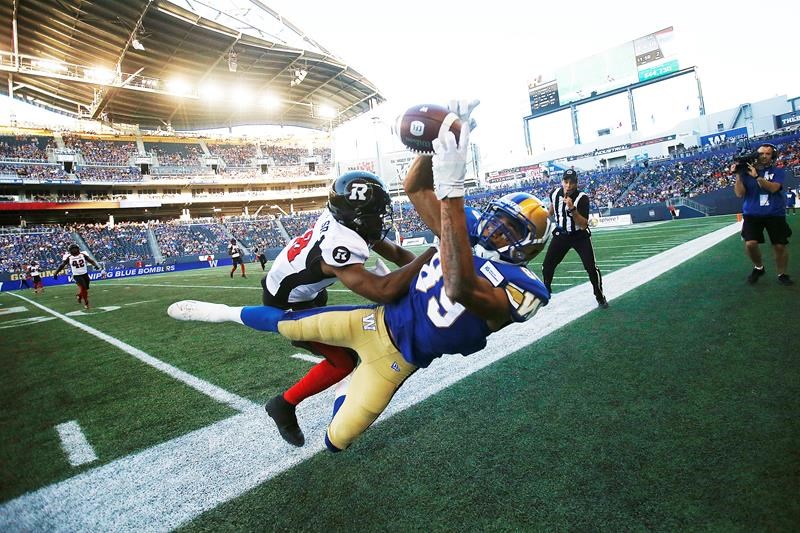 Winnipeg Blue Bombers’ Kenny Lawler (89) reaches out for the catch against Ottawa Redblacks’ Corey Tindal (28) during the first half of CFL action in Winnipeg, Friday, July 19, 2019. (THE CANADIAN PRESS/John Woods)

The score was 31-1, the Redblacks’ single point from an end zone punt by Richie Leone, as Ottawa (2-3) could do little offensively or defensively after the first half of the first quarter.

Nichols credited the defence for the interception and touchdown that turned the switch. Defensive back Winston Rose intercepted Ottawa quarterback Jonathon Jennings and took it 71 yards for a touchdown midway through the first quarter. Touchdowns from Andrew Harris, Kenny Lawler and Chris Strevelor followed.

“He jump started us with that pick six and we went on two or three touchdown drives after that,” said Nichols, who threw a team-record 19 consecutive completed passes.

Nichols said he didn’t know about the record at the time, but knew things were going well.

“That’s a complete offensive effort to do that,” he said.

Ottawa coach Rick Campbell said for he had some hope in the first quarter.

“It is disappointing, we came out of the gates pretty well,” said Campbell.

“It was a hard-fought game in the first quarter. They made a big play, which was a big momentum swing. We have to be good enough to overcome that and respond . . . We’re 2-3 so there’s a lot to play for. I remain hopeful by the way we start the game, it was a back and forth affair and when we don’t find a way to make plays, it snowballs out of control.”

Regardless of Ottawa’s players’ injuries, the Bombers have established themselves as the team to beat this season, suggested defensive lineman Willie Jefferson.

“The way we want to make it seem is they have to come through Winnipeg,” he said. “When we come to your house we’re going to bring our A game so you better bring your A game too.”

It was also a big night for Harris, who moved past Tracy Ham into 11th place in the all-time CFL rushing list and finished the night with 63 more yards added to the 8,036 he had going into the game.

“I’m just going to keep on week in, week out doing what I can to contribute,” Harris said. “We’re winning and it’s good, but for some reason I’m just waiting for us to have that game when everything clicks.”

It is the first time in 59 years the Bombers have managed to win five straight to open a season and, unlike last week, they didn’t give the visiting team a chance to make a comeback.

“I thought the defence did a great job,” said Winnipeg coach Mike O’Shea, who also credited Rose’s touchdown with flipping the switch.

Jennings, making his first start behind centre for the Redblacks, spent four seasons with the B.C. Lions where he passed for 66 touchdowns but also threw 51 interceptions.

After Rose’s touchdown, the Bomber offence clicked less than a minute into the second quarter when Nichols threw a 15-yard touchdown pass to Harris, then followed it up about three minutes later with a 54-yard-touchdown throw to Lawler to make it 21-1. It was Lawler’s first for Winnipeg.

The Redblacks kept the ball on the ground later in the quarter and looked to be closing in on scoring territory when a procedure call snuffed the drive.

Then Nichols’ 34-yard pass to Harris got the Bombers into Ottawa territory with under three minutes to go. Backup quarterback Streveler carried it the last three yards and the Bombers extended their lead to 28-1 with just 13 seconds left.

The Bombers failed on a third end goal just over nine minutes into the scoreless third quarter when Streveler came up short, but Ottawa couldn’t get the ball out of their own territory.

Streveler came in for Nichols early in the fourth quarter but couldn’t add another major, although Justin Medlock kicked a 33-yard field goal for the Bombers at 4:22 to make it 31-1.

Ottawa put William Arndt in at quarterback when they finally got the ball but it didn’t change their luck. Nichols returned to lead the Bombers for another series but Streveler came back for the final minutes.

An end-zone pass from Arndt with just over a minute left was intercepted by Winnipeg defensive back Chris Humes — which was about as close Ottawa came to scoring all night.

Winnipeg wide-receiver Lucky Whitehead went down late in the fourth but walked off under his own power.