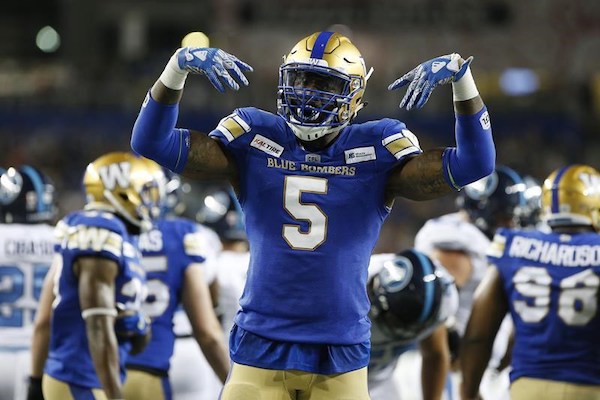 Winnipeg Blue Bombers’ Willie Jefferson (5) celebrates stopping the Toronto Argonauts from touching down across the one-yard line during second half CFL football action in Winnipeg, Friday, July 12, 2019. Can the Winnipeg Blue Bombers improve to 5-0? They get a good chance Friday as the visiting 2-2 Ottawa Redblacks line up behind a new quarterback. (THE CANADIAN PRESS/John Woods)

WINNIPEG — The Winnipeg Blue Bombers may be odds-on favourites to extend their season-opening winning streak to five games, but you’ll never get them to admit it.

“It’s a good start,” Harris said as his team prepared for Friday night’s home game against the Ottawa Redblacks.

Despite that perfect record, Harris doesn’t think the Bombers have reached their potential.

“I don’t think we’ve played a full game where it’s all three phases on fire . . . We have had glimpses,” he said.

Harris, a 32-year-old Winnipeg native, is off to a great start. The 10-year CFL veteran is third in the league in rushing yards, averaging 6.5 yards per carry.

“My body feels good,” he said.

“As long as I’m making an impact in some way or form, whether it’s catching or blocking, running the football or being a leader, I’ll be happy with that.”

Things haven’t been quite as rosy for Redblacks.

Two weeks ago, a couple of 2-0 CFL clubs met in Ottawa and Winnipeg walked away with a 29-14 win, starting a two-game skid for the Redblacks.

“I think he’s a talented football player,” says Bombers pivot Matt Nichols, who has seen him in action up close when Jennings was playing for the B.C. Lions. They met six times, with Nichols and the Bombers winning five.

The Bombers, with one of the best defences in the CFL this season, present a tough test for Jennings.

“But I think maybe what guys are more proficient at or what they actually have a better feel for sometimes changes, so we’ll have to see what that is for Jennings.”

“I think coach (Noel) Thorpe is one of the premier D co-ordinators in the league and he’s going to have those guys ready to go and coached up well.”

The Bombers have injuries of their own.

Star linebacker Adam Bighill remains a game-day decision and says he’ll leave it up to the training staff to say when he’s ready.

“This is a very long season,” said Bighill.

“I need to be the best for my teammates, my team, I need to be available for the bulk of the season, Western opponents in particular. That’s where being smart comes into it.”

Also still out of the lineup this week is receiver Chris Matthews, although he appears to be a healthy scratch.

“That’s the way you want to word it,” said O’Shea. “I’m thinking there’s always a variety of reasons you set the roster the way you do.”

WHO’S HOT: Winnipeg running back Andrew Harris was a CFL top performer after last week’s win against the Toronto Argonauts. Harris now has more than 8,000 career rushing yards. He had 14 carries for 116 yards last Friday night and needs just eight more Friday to move past Tracy Ham into 11th place on the CFL’s all-time rushing list.

A SEASON FOR THE BOOKS? A win Friday night would leave the Bombers at 5-0, a record they haven’t touched since 1960, when they put 10 consecutive wins together under legendary coach Bud Grant. However, the Bombers lost the Grey Cup to Edmonton that year.

EASTERN STRETCH: This marks the middle contest of the Bombers’ five-game run against East opponents. The Bombers head to Ontario for games against Hamilton and Toronto the next two weeks.