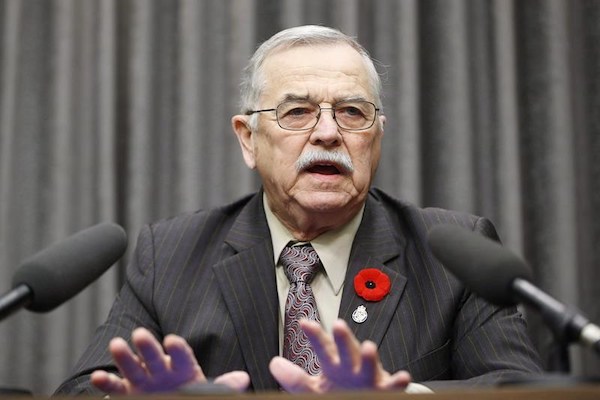 Cliff Graydon, Manitoba MLA for Emerson who was kicked out of the Manitoba PC government’s caucus for inappropriate comments to staff, speaks at a press conference in Winnipeg, Manitoba Thursday, November 8, 2018. (THE CANADIAN PRESS/John Woods)

WINNIPEG — A Manitoba politician who was kicked out of the governing Progressive Conservative caucus says he is running for re-election as an Independent and denies allegations he groped a fellow party member.

Cliff Graydon had previously said he would retire from politics after being ejected from the government backbenches over inappropriate remarks made to female staff members at the legislature.

But Graydon says voters in his Emerson constituency have asked him to run again, so he has registered as an Independent for the Sept. 10 provincial election.

Graydon was ousted from the Tories last fall after media reports that he had invited two women on separate occasions to sit on his lap, and invited one woman to lick food of his face.

Graydon acknowledged at the time he had an outdated sense of humour and had made inappropriate remarks, but he said he had not sexually harassed anyone and had no memory of inviting anyone to lick his face.

“I do have an outdated sense of humour. I guess it should have been changed,” Graydon said Monday.

Graydon also denied Monday an accusation from a long-time Tory volunteer that he groped her and propositioned her at a party social function at a Winnipeg bar in September 2017.

“I have not knowingly inappropriately touched anybody,” Graydon said, adding he had no idea who the woman might be.

The woman told The Canadian Press last November that Graydon came up behind her and grabbed her, before moving one hand over her body and asking her to go to his apartment.

The woman asked not to be identified because she feared it could hurt her career. A male colleague, also a Progressive Conservative, told The Canadian Press the woman had told him her story in February 2018.

No charges were ever filed and the allegations have not been tested in court.

Graydon, who is in his 70s, has also dealt with health issues including a suspected gall bladder attack.

He said Monday his health has improved and he wants to run for re-election in order to represent his constituents’ concerns over asylum-seekers crossing the border and other issues.

The Tories, Liberals and New Democrats have already nominated candidates in Graydon’s constituency, which is being renamed Borderland for the September election.