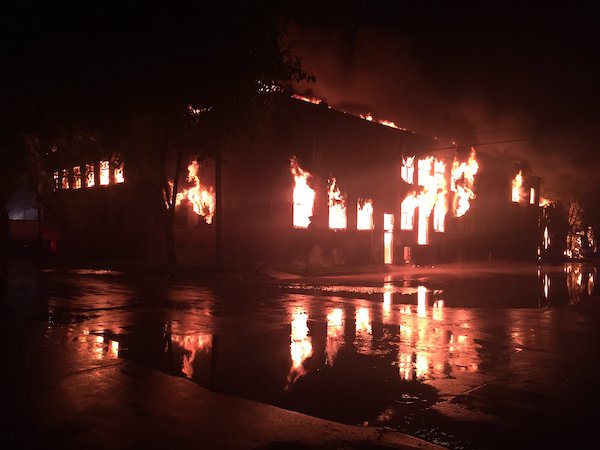 Winnipeg firefighters remain on scene of a large warehouse fire in the central part of the city.

Crews were called to an industrial building at 274 Jarvis Avenue just after 12:30 a.m. Monday to find a well-involved fire. The blaze pushed crews back as it intensified after about 40 minutes, a fire department spokesperson says.

Eight nearby homes were evacuated as a precaution, while Winnipeg Transit provided shelter for evacuees.

The fire later spread across the rest of the building, which encompasses a full city block. Most of the warehouse has since collapsed.

“The smoke and heat conditions were becoming intolerable,” said fire Chief John Lane. “The crews retreated and we reverted to a defensive attack using external handlines and aerial trucks.”

Lane said the south part of the building collapsed and the flames spread, which resulted in the partial collapse of the north end of the structure.

Lane said air quality was a concern during the blaze, which generated a lot of smoke that drifted to the east.

“We called Manitoba Sustainable Development to come and monitor the conditions.”

Manitoba Hydro cut power to the surrounding area to ensure affected hydro lines, poles, and transformers did not add to the hazards.

The Winnipeg Fire Paramedic Service says one firefighter slipped and fell at the scene, but was able to remain on-duty.

Smoke from the blaze is travelling east across the city and residents are asked to keep their windows closed.

The cause of the fire remains under investigation. No damage estimates are yet available.