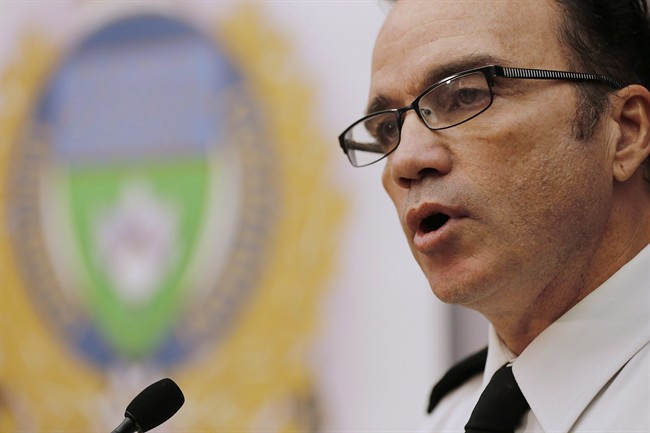 WINNIPEG — A methamphetamine crisis is behind the major increase in property crimes, Winnipeg’s police chief said, and it will only worsen if governments continue to lag on increasing addiction treatment options.

“There’s no other major city in Canada that is dealing with a meth crisis like we are,” Chief Danny Smyth said Monday after the release of the Winnipeg Police Service’s statistical report for 2018.

The report shows property crime increased by nearly 20 per cent from the previous year and was 44 per cent higher than the five-year average.

There were spikes in the number of break-in, vehicle theft, fraud and mischief investigations. Violent crime rates also remained high, the chief said, and robberies shot up about 10 per cent.

“I can tell you that we are halfway through 2019 and things are getting worse,” Smyth said.

There have already been 25 homicides in Winnipeg this year, three more than there were in all of 2018.

There have also been four police-involved shootings, four in-custody deaths and an armed standoff. Smyth said nearly all have involved drugs.

The Addictions Foundation of Manitoba has said meth use has increased by more than 100 per cent in adults and nearly 50 per cent in youth since 2014.

Smyth added 19 police officers have been stuck with needles in the last few years.

A government-commissioned report released in June called for more detox facilities, longer-term treatment programs and a way to safely distribute needles to fight rising meth use.

The number of people in publicly funded addictions programs who reported using meth more than doubled between 2014-15 and 2016-2017, the report said.

Smyth said he understands a comprehensive response to addictions will take time, but safe shelters and detox units could be opened immediately.

“We need some relief sooner than later.”

He called on the provincial and federal governments to provide funds and resources, adding that the upcoming provincial election does not mean action should be delayed.

“It’s very difficult to imagine how we can think of Manitoba becoming one of the most improved provinces when Manitoba’s crime rates rank as the worst in Canada,” Bowman said.

Statistics Canada also released data on Monday about on crime using its calculation called the Crime Severity Index, which measures the volume and severity of police-reported crime.

The country’s overall crime rate and the severity of crime increased by two per cent from last year, but it is substantially lower than a decade ago.

Statistics Canada noted that methamphetamine offences increased by 13 per cent and possession of meth had the second highest incident rate, following only cannabis.