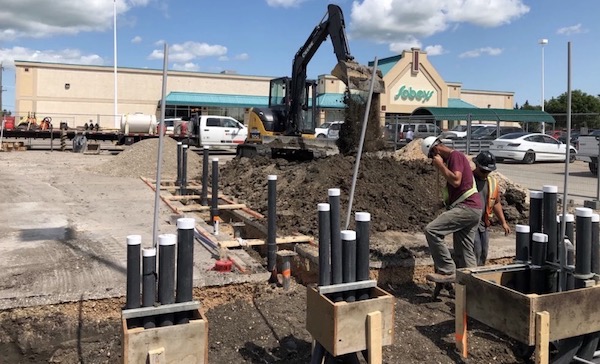 The new Tesla Supercharger Station in Portage la Prairie is under construction. (TESLAMOTORSCLUB.COM)

Shovels are in the ground on a new six-stall Tesla Supercharger Station in Portage la Prairie.

Winnipeg-based real estate development company Shindico has partnered with the automobile maker to bring the charging station to a parcel of land they own at Portage’s Westfield Crossing shopping centre.

Construction was scheduled to be completed by last August, but development at the site was pushed back until recently.

According to iPhoneinCanada.ca, a similar Tesla charging station is already under construction just west of Portage la Prairie at Brandon‘s Corral Centre.

Depending on the charge needed, Tesla owners could pop in for a quick boost and be on their way down the Trans-Canada Highway again in no time.

According to the vehicle maker, Tesla has four Superchargers planned for Manitoba, with the other two set for Reynolds and Winnipeg. There is no estimated date as to when the other two will power up.