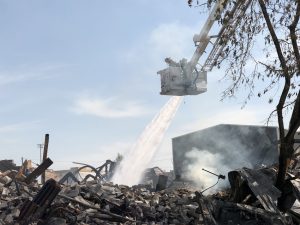 Firefighters douse hotspots at a warehouse at 274 Jarvis Avenue on Tuesday, July 23, 2019, more than 24 hours after it erupted. (MAURICE BRUNEAU / CHRISD.CA)

WINNIPEG — Shawna Dempsey did not believe it when she received a text saying a warehouse used by more than two dozen artists as a studio space had gone up in flames.

Dempsey asked if it was a joke. The reply shook her to her core.

“Our studio is gone. There’s nothing left,” it said.

The three-storey building on Jarvis Avenue in Winnipeg was a second home, workspace and supportive community for 27 artists, Dempsey said. In only a few hours, it was reduced to rubble and ash. The life’s work of many of the artists was destroyed.

“What do we do now, because as artists our identity is based on what we create and what we have created is gone now, so who are we?” Dempsey said Tuesday from a farm near Carberry in southwestern Manitoba.

“I’m sure all of us are evaluating that in this moment.”

Many artists hopelessly watched from nearby streets, Dempsey said.

“This is a personal loss. It’s a psychic loss. It’s a conceptual loss, because we know how important art is in society.”

Firefighters were called to the building just before 1 a.m. on Monday. After about half an hour, crews were pulled back when conditions rapidly deteriorated. 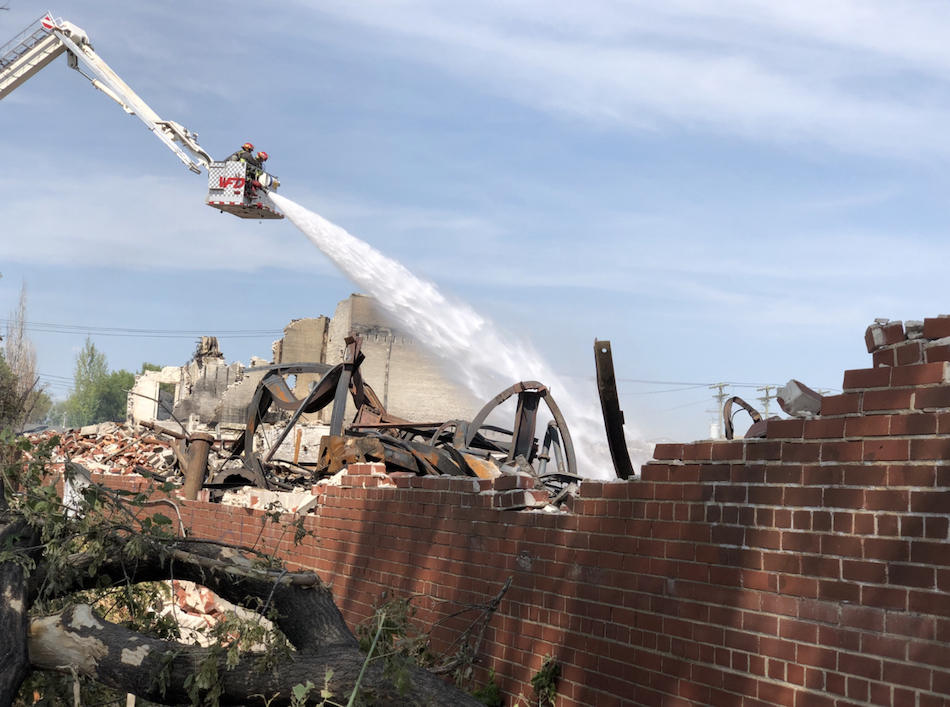 The south part of the building collapsed and the fire spread, which resulted in the partial collapse of the structure’s north end.

Firefighters battled the blaze for 32 hours and were still monitoring for flaring hotspots Tuesday afternoon.

No damage estimate has been released. The fire’s cause is still under investigation.

Dempsey is a performance artist who collaborates with Lorri Millan. The two are known for their films, videos and public art projects addressing lesbian and feminist themes. All their costumes were destroyed. They also lost every prop, film negative, publication and poster, as well as financial records, she said.

Other artists in the building were painters, sculptors and furniture-makers. Their loss seems even more monumental, said Dempsey, because some lost decades of work.

Meeka Walsh, editor of Manitoba arts magazine Border Crossings, said she felt overwhelming grief for those affected when she learned of the fire.

“It would be as though your memory were being erased, especially for the artists who are senior artists. Everything is gone,” she said.

Walsh and her colleagues have connected with the Winnipeg Art Gallery and Plug In Institute of Contemporary Art to create an online fundraiser. It had raised nearly $50,000 by Tuesday afternoon.

She is grateful that no lives were lost, but added many of the artists have been left without a livelihood.

The work can never be fully replaced, Walsh said. That’s why it’s important to provide financial and community support to the artists so they can re-establish their studios and practices.

“It’s an irreparable loss for the individual artist, but it’s also a loss for all of Canada for art history.”

Video courtesy the City of Winnipeg