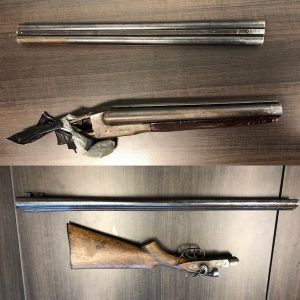 Guns seized during a search of a Brandon home on Wednesday. Two men have been arrested and charges. (BPS / HANDOUT)

Brandon police have arrested two men and seized multiple firearms after an incident in the Wheat City on Wednesday.

It all began at around 11 a.m. when a motorist reported a vehicle travelling the wrong way into oncoming traffic heading east into Brandon on Highway 1A near Kemnay.

Officers tracked the vehicle to a residence on 14th Street North, where it was determined to be a stolen 1986 blue Dodge pickup from Boissevain. Officers secured the perimeter after believing there were firearms inside.

About 40 minutes later, a 34-year-old man was arrested. Police later arrested a 22-year-old man at a separate location at approximately 10:45 p.m.

Police obtained a search warrant for the home and found a sawed-off shotgun and the suspected matching piece of the barrel.

Officers were then led to a rural area southwest of Brandon, where a broken down double-barrel shotgun and other suspected stolen property was recovered.

Both suspects remain at the Brandon Correctional Centre and face several charges. They are scheduled to appear in court today.