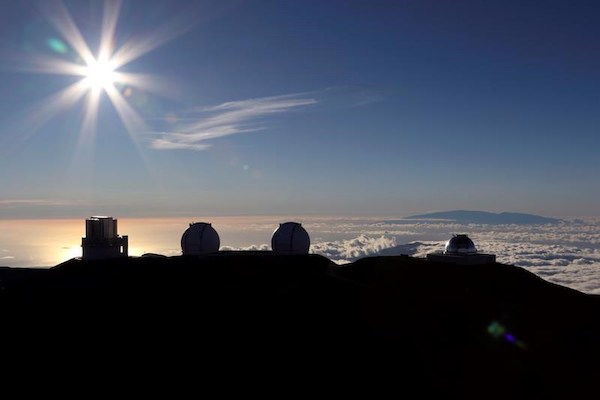 The sun sets behind telescopes at the summit of Mauna Kea on July 14, 2019. (THE CANADIAN PRESS/AP, Caleb Jones F)

OTTAWA — Canada should remove its financial support from a plan to build a massive new telescope in Hawaii on land considered sacred by Indigenous Hawaiians, the Union of B.C. Indian Chiefs said Wednesday.

In an open letter to Prime Minister Justin Trudeau and Hawaii Gov. David Ige, the organization called for construction plans for what’s known as the Thirty Meter Telescope project to be shut down and for the Canadian government to withdraw support for the project.

In April 2015, the former Conservative government announced it would provide up to $243.5 million for the project over a 10-year period.

The National Research Council is a full partner in the plan, along with the California Institute of Technology, the University of California, and national science authorities in India, China and Japan. The construction effort cleared its regulatory hurdles two weeks ago.

But opposition to it has been mounting, with protesters blocking a road to the summit of Mauna Kea this week. The new telescope would join 13 other observatories already on the volcanic peak, a location astronomers prize for its lack of light pollution.

On Tuesday, a judge denied a motion filed by telescope opponents seeking a temporary restraining order to stop construction. Several dozen people have been arrested at the blockade.

The federal government’s support for the telescope runs counter to its commitment to reconciliation with Indigenous Peoples, the Union of B.C. Indian Chiefs said Wednesday, adding it also calls upon the governor of Hawaii to ensure the state respects and protects the Kanaka Maoli’s right to be stewards of their lands and waters. The Kanaka Maoli are Indigenous Hawaiians.

“The deep emotional, cultural, and spiritual attachments the Kanaka Maoli have to Mauna Kea must be honoured,” it said.

Canada respects the rights of all people to voice their opinions in a peaceful way, the National Research Council of Canada said Wednesday, adding that hundreds of consultations have taken place since the development process began in 2003.

“Great care has been taken to identify the best location for the TMT, to have minimum impact out of respect for Mauna Kea’s rich ancestral history and the spiritual beliefs of native culture,” it said in a statement.

“The telescope will be built away from the summit, one mile from Pu’u Wekiu and several hundred feet below it within the astronomy district.”

Pu’u Wekiu is a cinder cone on Mauna Kea, the highest point in Hawaii.

Canada will keep working with partners in the project to find a path forward and peacefully engage with Hawaii, the Indigenous communities, and international partners, the research council added.

The office of Science Minister Kirsty Duncan echoed Wednesday that the government believes in meaningful consultation with Indigenous Peoples and supports free speech and peaceful protest.

“Our priority is the health and safety of all involved, and we trust all parties will act respectfully and responsibly as they work toward a resolution,” it said in a statement.

The decision to fund the telescope was made in 2015 by the previous government, it said, adding it is monitoring the situation closely.