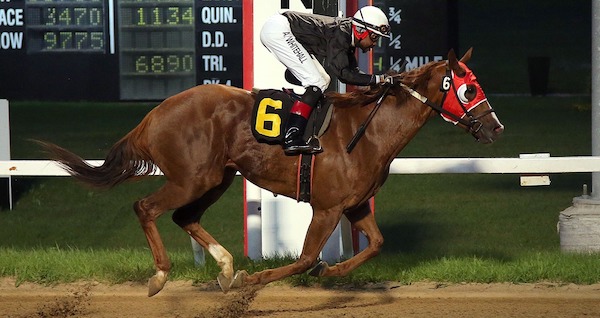 We won’t know exactly which horses will go to post in the 71st Running of the Manitoba Derby until Thursday, but the nominations are in.

And among the 15 thoroughbreds nominated to run in this year’s $75,000 highlight-of-the-summer on Aug. 5, is the filly – and sister to Escape Clause – Hidden Grace.

Hidden Grace, who was being prepped for what would have been a sure victory in the Manitoba Oaks on Friday, Aug. 2, is an undefeated bay filly from Going Commando bred in Manitoba by Cam Ziprick, Charles Fouillard and Barry Arnason. Hidden Grace won both her races as a two-year-old – the Debutante Stakes and the CTHS Sire Stakes. She has won all three races she’s run this year – The Hazel Wright Sire Stakes, the Chantilly and the RC Anderson Stakes, a race she won by nearly 12 lengths on July 13.

Her sister, Escape Clause, ran in the Derby as the only filly two years ago and lost a tight battle to Plentiful. Hidden Grace has not yet run with the boys.

Among the other locals nominated are some of the best three-year-olds at the track this year.

Raven’s Cry, owned by Larry Falloon, Andrew Clarke and Denis Huberdeau and trained by Marvin Buffalo won a $14,400 race at the Downs on June 19 and just finished second in a $13,600 allowance on July 17.

Candy Con, owned by 2PF stable and trained by five-time champion Tom Gardipy Jr., won a $14,400 race on June 29 at Assiniboia Downs and finished third in the Harry Jeffrey Stakes on July 13.

Empirical Data, owned by Scott Horst and trained by defending champion Jerry Gourneau, just finished second in the Harry Jeffrey Stakes. He’s run seven times at the Downs this summer and notched four wins, two seconds and a third and obviously has never been out of the money.

Eye Cloud, owned by Mike Powers and trained by Jerry Gourneau, has not won this season and just finished fourth in the Harry Jeffrey Stakes. He has two third-place finishes in eight starts this year – the last three at Assiniboia Downs.

Flinch, owned by MJ racing and trained by Juan Pablo Silva, has a win, two seconds and a third in eight starts this summer, six at ASD.

The invaders nominated are Call It a Wrap from Century Mile in Calgary; Miltontown, which last raced July 5 in the Iowa Derby at Prairie Meadows; Moscow Minister, who last raced on June 23 in a $20,000 claimer at Churchill Downs in Louisville, Ky. (finished seventh); Oil Money, who won the Golden Boy Stakes at Assiniboia Downs on June 22; Rocknroll Rocket from Canterbury in Shakopee Minn.; Senor Friday, who came from Canterbury to win the Harry Jeffrey Stakes at ASD on July 13; Triple Double Zero, an invader from Lone Star Park in Grand Prairie, Tex., being trained by ASD’s Jamie Hartmann; and Vangilder, trained by Racing Hall of Famer Steve Asmussen. Vangilder won the Charles Taylor Derby in Albuquerque, N.M. on July 20.

The final entry list will be announced on Thursday at a press reception at Assiniboia Downs.

Meanwhile, congratulations to owners Gary Danelson and Barry Arnason, trainer Gary Danelson and jockey Antonio Whitehall for Tadaa’s impressive win in Wednesday night’s Winnipeg Sun Stakes. Tadaa beat rival Settle Down Eileen for the third time in five outings this season. It was also Tadaa’s second straight win over Settle Down Eileen. Tadaa, another sister of Escape Clause and Hidden Grace, has won a $30,000 race on May 24, the Canada Day Stakes on July 1 and now the Winnipeg Sun Stakes. Settle Down Eileen, who was second in all three of those races, beat Tadaa in the Preservata Stakes on May 17 and the LaVerendrye Stakes on June 7. Tadaa was second in both of those races. It’s been quite an amazing summer for both mares.