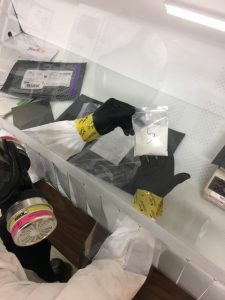 A package of fentanyl that was intercepted on its way to Winnipeg on October 1, 2017. (RCMP / HANDOUT)

A Winnipeg man, who was arrested nearly two years ago for importing fentanyl, has been sentenced to eight years in jail.

Corey Slotta, 30, was convicted July 15 after an investigation turned up a parcel of powdered fentanyl destined for Winnipeg that was seized entering Canada through Vancouver on October 1, 2017.

Police later obtained a search warrant for a local residence and found 49 grams of fentanyl powder on October 10, 2017.

“Fentanyl is a synthetic opioid which is 100 times more potent than morphine,” RCMP said in a release. “A lethal dose of fentanyl is as little as two milligrams and any quantity of fentanyl needs to be handled with extreme care. The drugs seized in this incident are equal to 24,500 potential fatal doses.